Condensation is the scientific term for the process that occurs when a gas (vapor) changes into liquid. There are numerous examples of condensation. Chances are that you’ve observed this natural phenomenon many times while going about your ordinary activities. 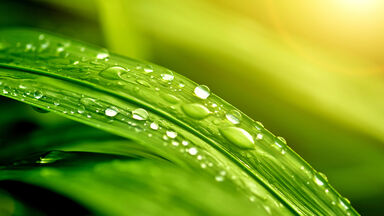 How many of these ten real-life condensation examples have you experienced?

Morning Dew on the Grass

Have you ever wondered why there are visible water droplets on grass early in the morning even if it didn’t rain during the night? The answer is condensation. During the overnight hours, the air near the ground cools to or below the dew point. As a result, water vapor in the atmosphere becomes saturated and condenses to form dew on the grass.

Clouds in the Sky

To see another example of condensation, all you have to do is look up at the sky. Clouds are formed as a result of water vapor cooling in the atmosphere. As the temperature of the water vapor falls to the dew point or below, it condenses to become tiny water droplets. These droplets cling to tiny particles of dust in the atmosphere and become clouds.

Rain occurs when too much water condenses around atmospheric dust particles for the water to remain in the sky in the form of clouds. Instead, the condensed droplets get bigger, heavier, and eventually fall to the ground in the form of rain. Other forms of precipitation, such as snow and sleet, are also related to condensation. Snow and sleet are frozen droplets of water.

Fog in the Air

Fog forms the same way as clouds, though it stays closer to the ground rather than being in the sky. When water vapor condenses to liquid in the form of droplets that stay suspended in the air, the result is fog. It only occurs when conditions are extremely humid. Fog can vary in thickness, ranging from light to dense.

When conditions are just right, it’s possible to see your own breath in the form of condensation. When the warm and moist vapor that makes up your breath hits air that is cold and humid, it becomes tiny water droplets. These droplets take on a cloud-like appearance that you can see.

You don’t actually have to be outdoors when it’s cold and humid to see your breath in the form of condensation. Instead, just hold a small mirror in front of your mouth and exhale on it. The water vapor in your breath will condense and cause the mirror to take on a foggy appearance.

When you step out of a hot shower and look into the bathroom mirror, chances are that you won’t immediately see your reflection. Instead, you’ll have to use a towel to wipe away the condensation that formed on the surface of the mirror. This is caused by the warm water vapor making contact with the cooler surface of the mirror.

Have you ever noticed water forming inside the windows of a warm vehicle when it’s cold outside? This is an example of condensation. When the warm air vapor from inside the heated car or truck makes contact with the windows, which are cold due to the outside air temperature, beads of water will form on the interior side of the glass.

Eyeglasses That Cloud Over

Have you ever stepped from an air conditioned building or car into the warm outdoors only to have your eyeglasses or sunglasses immediately become foggy or cloudy? This inconvenience, that impairs your vision until you can wipe your glasses is a very common condensation example.

It’s not unusual for moisture beads to form on the outside of your drinking glass while you’re enjoying a cool beverage. While this might seem odd, it’s actually just an example of condensation. Once the water vapor in the air hits the cool surface of a glass containing an icy beverage, the vapor transforms into drops of water that are often described as sweat.

Evaporation Is the Opposite of Condensation

Avoid confusing condensation with evaporation examples. The two terms are related, but they have opposite meanings. While condensation occurs when a gas or vapor changes into liquid form, evaporation happens when a liquid substance changes to gaseous form. For example, when the morning dew burns off, it does so through the process of evaporation. Learn more about evaporation and other related scientific terms and processes.

Science is all around you. Now that you have a better understanding of what condensation is and know how to recognize it when you see real-life examples, you have become more knowledgeable about science and the natural world. Continue to deepen your knowledge of science and expand your observational skills by learning more about related concepts like weather, energy, and biology.