10 Differences Between a Frog and a Toad

People sometimes use the words frog and toad as if they mean the same thing. Frogs and toads are both amphibians. They are similar in some ways, but they are definitely not the same. Learn about the difference between frogs and toads. Once you master this information, you'll know how to tell a frog from a toad. 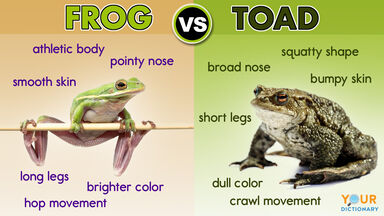 difference between frog and toad with examples
Advertisement

There is a difference between frog and toad legs in terms of length. Frogs have much longer legs than toads. The legs of a frog are actually longer than the combined length of the animal's head and body. Toads have much shorter, squatty legs.

Related to the difference in leg length, frogs and toads don't move around the same way. Frogs tend to hop, which is easy for them because their legs are so long. Toads tend to get around by crawling, as their much shorter legs are not built for jumping.

Frogs and toads don't have the same shape noses. A frog's nose is somewhat pointy in shape, but that is not the case for toads. A toad's nose is much broader in shape than that of a frog.

Frogs and toads are not the same color. Frogs tend to be much brighter in color than toads. Most common frogs are bright green or yellowy-green, though some have a brownish-green hue. Toads are dark green or a dull shade of olive green.

The skin is very different on toads and frogs. The skin of a frog is smooth and slick in appearance. The skin of a toad is bumpy. Toads also have thicker skin than frogs have.

Frogs and toads also differ in terms of how moist their skin is. Frogs have moist skin that is sometimes described as slimy in feel. The skin of toads is usually not moist at all. Instead, toads have dry skin.

Frogs live on the water. They don't stay in water 100 percent of the time. When they leave the water to go on land, they don't venture far away from water. Toads live on land. They will go into the water, but that's not where they live. Because toads spend most of their time on land, they tend to stay close to the water.

Frogs and toads both breed in the water and lay eggs, which are called spawn. However, there is a difference in the appearance of toad vs. frog spawn. Frog spawn forms clumps that tend to stay in clusters. Toad spawn does not clump. Instead, it forms stringy strands that float on the water.

When frogs and toads first hatch, the baby animals are called tadpoles. Frog tadpoles are longer and leaner than those of toads, which are shorter and more squatty. Frog vs. toad tadpoles differ in terms of color. Toad tadpoles are solid black, while the skin on frog tadpoles is dotted all over with flecks of gold.

Review this quick, one minute video to see the differences between frogs and toads in action.

Now that you are aware of some of the key differences between toads and frogs, you will be able to tell what you're looking at the next time you see one of these interesting amphibians. Since you've learned how to tell a frog from a toad, take the time to learn more about how living things are classified. This will provide you with a broader understanding of how animals and other living things differ from one another, even when they are very similar in some ways.