Abraham Lincoln served as the 16th president of the United States of America. He is known for being the president who signed the Emancipation Proclamation, bringing a long-overdue end to the practice of enslavement. He was inaugurated on March 4, 1861 and re-elected in 1865. His second term was cut short, as he was shot and killed by John Wilkes Booth on April 15, 1865. Many memorable Abraham Lincoln quotes serve as reminders of his bravery and service. 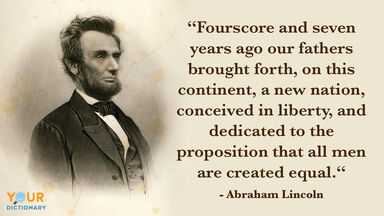 The Library of Congress houses an expansive collection of Lincoln's writings, including speeches, letters, memoranda, and other works. Throughout his lifetime, both before and during his time as a statesman, he had quite a bit to say on the subject of life and hope, as evidenced by the opening line of his Gettysburg Address and other writings.

Abraham Lincoln's views on leadership are reflected in both his words and his actions. His first inaugural address included some telling quotes about his perspective on this topic, which may have something to do with why he was elected to a second term. There are also some great leadership quotes in his second inaugural address.

Lincoln frequently shared his perspective on democracy through speeches, both before and after he was elected to serve as President of the United States. He touched on this topic in his Cooper Union campaign speech, as well as on many other occasions, including his inaugural addresses.

The American Civil War loomed large before and during Lincoln's time in office, so some of his most fearless and memorable quotes are related to factors leading up to the Civil War and this difficult period in American history. Such matters were the focus of his widely-known House Divided speech, as well as other writings and speeches during his campaign, inaugural addresses and time in office.

Abraham Lincoln often alluded to the importance of self-reliance. This message resonates in many of his writings and other works. His thoughts on this topic are just as relevant in the modern world as they were during Lincoln's time on Earth.

Learn More About the 16th President

Now that you've had an opportunity to review over 100 of Abraham Lincoln's quotes, chances are you're interested in learning more about him and his life. Start by reviewing a fascinating Abraham Lincoln timeline. Then, explore some interesting facts about Abraham Lincoln. Finally, learn about some of his most notable accomplishments.