Portmanteau, pronounced “port-man-tow,” refers to a new word made from two words and their meanings. For example, the portmanteau brunch refers to a combined meal of breakfast and lunch, and spork is a mix between a spoon and a fork. Keep reading for 100 more examples of creative combined words, perfect for the 21st century. 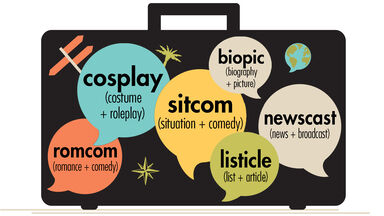 The original meaning of portmanteau means “suitcase” in French, implying that two words are packed inside. Writers use portmanteaus (or portmanteaux) to make their word choice more interesting. Portmanteaus show that a writer’s creativity infuses the very words they use.

Many nonsense portmanteaus were created by authors such as James Joyce, Charles Dickens, and Lewis Carroll. However, other portmanteaus have made their way into our everyday speech and reading, like popular Spanglish words. Check out these examples of portmanteaus from entertainment, news, technology, and more.

Lots of entertainment buzzwords are actually portmanteaus. They abbreviate concepts for movies, television, and music to make them more appealing to an audience. Here are some portmanteau words that you may have read in an entertainment magazine:

In addition to the portmanteaus above, you’ll see many examples in celebrity couple names. Brangelina (Brad Pitt and Angelina Joe), Kimye (Kim Kardashian and Kanye West), and J-Rod (Jennifer Lopez and Alex Rodriguez) are all portmanteaus!

The news media is another area that creates a lot of portmanteaus. It makes their content readable and engaging for an audience. Here are a few popular portmanteaus that you may see while skimming a news article or broadcast:

Another popular portmanteau in the news comes from the Nixon administration. You may notice that any political scandal is often coupled with the word gate (e.g., pizzagate, Russiagate, Monicagate, Weinergate). The media often creates a portmanteau with the word Watergate from the infamous Watergate hotel break-in to imply that a particular event is scandalous.

Many portmanteaus are hiding in the dictionary as regular words! Take a look at the list below to learn which words you may not have known are actually portmanteaus.

If you go back far enough into any word’s etymology, you’ll find any number of portmanteaus that helped create it. English is a fascinating language in that way!

The late 20th-century trend of adding the prefix e- to anything electronic is one of the earlier uses of technological portmanteaus. The same answer goes for the prefix web- and the suffix -log, both of which have a strong presence in our vocabulary today.

Some of your favorite new foods may actually be portmanteaus. Words like froyo and frappuccino are embedded in our modern culinary lexicon – and they’re delicious, too! Other common food portmanteaus include:

Several crops have been crossbred to create new foods. Pluots are just one example of two fruits that come together for a new purpose. Who knows what the future holds for your other favorite foods?

Crossbreeding occurs in the animal world as well. It occurs in domesticated animals, captive animals, and even in the wild. Check out these portmanteaus derived from brand-new animal breeds.

Crossbred dogs, also known as designer breeds, are popular because of their desirable characteristics. Many of these dog breeds end in -doodle or -poo, indicating that the dog has been crossbred with a poodle. Poodles are popular dogs for crossbreeding because of their hypoallergenic fur.

Examples of dog breed portmanteaus include:

Dogs aren’t the only animals with new names! Here are more examples of animals that have been crossbred in captivity or in the wild, and their portmanteau names:

Many of these animals are sterile, meaning they cannot reproduce with another animal. They are also very rare and almost always found in captivity.

Have you ever heard a new slang word that sounded like two words mixed together? Now you know that it probably was! Read these popular portmanteaus that might crop up in your everyday conversations:

Another common portmanteau you might find is alcoholic + something addictive (e.g., workaholic, shopaholic, chocoholic, rageaholic). It’s so commonly used that many people believe that -holic is a suffix for “addiction.” However, it’s just a conversational portmanteau that has taken on the last part of alcohol in many forms.

Like many helpful and delightful words, portmanteau comes from literature. It first appeared in Lewis Carroll’s Through the Looking Glass in a quote from Humpty Dumpty:

“Well, ‘slithy’ means ‘lithe and slimy’ and ‘mimsy’ is ‘flimsy and miserable’. You see it’s like a portmanteau—there are two meanings packed up into one word.”

A master of word use and creative word choice, Carroll created an entirely new genre of etymology in one quote. Portmanteau itself is even a portmanteau! It’s French for “suitcase,” and combines the words porter, which means “to carry,” and manteau, which means “cloak.”

It’s tempting to say that portmanteaus are just like compound words, but they’re not. Compound words like firefighter and ladybug also use two words to make a new word. However, in a portmanteau, one or both of the words is shortened in a clever way.

Add Some Wordplay to Your Writing

Portmanteau words are a great way to add creativity to your writing with wordplay. Audiences love clever word choice in writing, and it doesn’t get more clever than creating your own words. For more wordplay ideas, take a look at an article that provides examples of malapropisms.