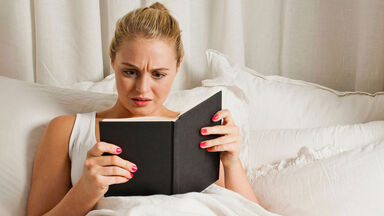 There several types of unreliable narrators:

Emily Bronte’s masterpiece, Wuthering Heights, is told from the perspective of Nelly, a servant to the families described in the story. Nelly has an intimate knowledge of much of the events of the tale, but she loves to embellish things a bit. Her own opinions cause her to exaggerate qualities of the characters and create a biased telling of events.

Holden Caulfield in The Catcher in the Rye

Holden Caulfield, the main character of The Catcher in the Rye by J. D. Sallinger, is another great example of an unreliable narrator. He is telling the story from a mental institution, so his grasp on reality is suspect. In addition, he has the sometimes naive viewpoint of a teenager, and this can lead him to misinterpret events.

Pi Patel in The Life of Pi

The Life of Pi by Yann Martel also features an unreliable narrator. Stranded at sea, Pi Patel must divorce himself from reality in order to survive. As he tells the story of his voyage, he alters events in a way that allows him to process what has happened. In the end, the reader learns the true story and must reconcile the differences.

Vladimir Nabokov’s complex tale of incestuous family relationships is told from the perspective of Humbert Humbert, who is unhinged and sometimes willfully unreliable. Humbert Humbert’s unhealthy obsession with his step-daughter and his treatment of her mother are only justified in his mind, but it is through his perspective that the reader learns the story.

The Unnamed Narrator in The Turn of the Screw

In Henry James’ famous story The Turn of the Screw, the unnamed narrator is simply a guest at a Christmas party where stories are being told. In telling the story of the governess and the children, he is repeating what he’s heard. Because he is not a part of the story and is an outsider to the events, everything he tells is suspect.

The Unnamed Narrator in The Tell-Tale Heart

Edgar Allan Poe’s The Tell-Tale Heart is a chilling tale of guilt and murder, told from the perspective of a narrator who has lost his grip on reality. Because of his guilt, the narrator imagines things, yet he reports them as if they are happening. The reader must decide what is real and what is not.

Alex in A Clockwork Orange

Anthony Burgess’ A Clockwork Orange is a classic example of an unreliable narrator who is a liar. The reader knows Alex is a sociopath, and he is telling the story while drunk. In addition, he has delusions of grandeur that are obviously not part of the reality shared by most people.

Huck in The Adventures of Huckleberry Finn

The Adventures of Huckleberry Finn is a great example of a naive unreliable narrator. In Mark Twain’s classic story of small-town life and slavery told from the perspective of a child, Huck talks about being wrong to help Jim, who is a runaway slave. However, the reader knows that Huck is doing the right thing.

Rebecca by Daphne du Maurier is a chilling story about a woman who marries a man and goes to live at his remote estate. She is his second wife, and as Mrs. de Winter tells the story, the reader begins to doubt her perspective. As an outsider, she does not know what happened to the first Mrs. de Winter but becomes intent on finding out.

Mark Haddon’s story is told from the perspective of a boy with high functioning autism who serves as a naive unreliable narrator. What he sees and does not see differs from most people, and as he begins to investigate the death of a dog, he focuses on some details and completely misses others.

Nick in The Great Gatsby

In F. Scott Fitzgerald’s The Great Gatsby, Nick does not intentionally deceive the reader. However, his own opinions color the way he tells the story. He claims not to judge characters, but the way he describes them plainly indicates that he does judge them. This calls into question the veracity of the story.

The Unnamed Narrator in The War of the Worlds

H.G. Wells’ The War of the Worlds is written in the style of sensationalist or yellow journalism. This exaggeration by the unnamed narrator creates unreliability, and the listener or reader must question the truth of all the events described.

An unreliable narrator is only one kind of storyteller. There are many kinds of narration, including reliable narrators as well. Learning about how stories are told can help you become a better reader and truly appreciate the work you explore.