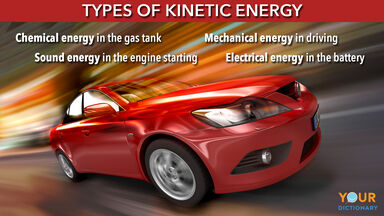 When energy is stored in an object, it has the potential to be used. That's why it's called potential energy. Think about a runner waiting at the starting line of a race. The tension in their muscles is potential energy before the whistle blows to start the race. There are two main types of potential energy, though each type of energy has a potential form.

When an object is held in a vertical position, it has gravitational potential energy. The amount of energy it's storing has to do with the object's mass and how high it is. Heavier objects have more potential energy, as do objects that are higher. Examples of gravitational energy include:

If you drop a small rock into a lake, it will make a smaller splash than if you drop a large rock. That's because the heavier rock has more gravitational potential energy.

All of these examples allow elastic materials and springs to hold potential energy. When they release the energy, it becomes kinetic.

Electrical energy comes from electric charges. We channel the energy from these charges in wires and electrical cords in order to use them to light up our house. Examples of electrical energy in your everyday life include:

Chemical energy is the energy released when chemical bonds form or break like in chemical reactions. You aren't likely to see this type of energy on the molecular level, but you can see it in the following examples:

Nuclear energy typically brings about images of atom bombs and nuclear power plants. It occurs when atoms fuse (fusion) or split (fission). It is used to heat houses or destroy whole landmasses. Examples of nuclear energy include:

Sound energy is an easy one because you hear it. When vibrations create sound energy, it goes to your ear and is translated by your brain into the strumming of a guitar or call of your mother’s voice. Additional examples of sound energy include:

You can find all different forms of energy around you. The two basic types include potential and kinetic energy, but they split into other forms. Chemistry and physics are so interesting. Learn more about chemistry by exploring chemical property examples. Explore more about energy flow with examples of insulators. From there, discover how hydraulic systems work.