15 Easter Symbols and Their Unique Meanings

Easter is a religious observance that is both somber and joyous. The holiday also includes a number of practices and traditions that aren't strictly faith-based. Learn more about this springtime holiday by discovering some interesting Easter symbols and meanings. 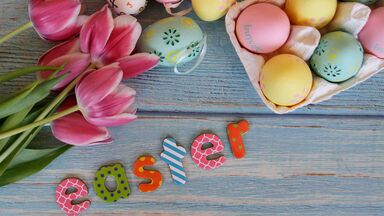 As Easter is a Christian holiday, it isn't surprising that many of the most widely known symbols of Easter are religious in origin.

Dogwood trees are an important symbol of Easter, due to their role in the crucifixion of Jesus. It is said that the wood of a dogwood tree was used to build the cross upon which Jesus was crucified. Even though Easter isn't at the same time every year, these trees typically bloom on or very close to Easter.

Easter lilies are often the centerpiece of Easter celebrations. Legend has it that white lilies sprung from the ground around Jesus as he spent his final hours on the cross. It is said that when his perspiration hit the ground, a lily grew up in that spot. As a result, Easter lilies are symbolic of new life, as well as purity. For Easter, they symbolize Jesus' resurrection and the promise of everlasting life.

In many parts of the world, hot cross buns are a traditional food for Good Friday, which is the day Jesus was crucified on a cross. This day falls on the Friday immediately before Easter Sunday. Each bun features a cross on top, which symbolizes the cross on which Jesus died. The spices included in the buns are said to be representative of the ones that were used to prepare Jesus' body for the tomb.

Palm Sunday is the week before Easter Sunday. During Catholic church services on Palm Sunday, parishioners are provided with palm fronds that are used to ceremonially recreate Jesus' arrival in Jerusalem prior to the crucifixion. This represents the biblical story of townspeople honoring Jesus as he rode into Jerusalem on a donkey by tossing small branches (likely including palms) and other items ahead of his path. Palms are said to symbolize victory and peace.

The cross is among the most powerful and important religious symbols of Easter. While religious crosses can be made of different materials, a plain wooden cross is the version most symbolic of Easter. That's because this type of cross most accurately depicts the cross upon which Jesus was crucified and where he died, before being placed in a tomb and being resurrected three days later.

Imagery depicting Jesus' empty tomb is also a significant religious symbol for Easter. The fact that the tomb is empty symbolizes the mystery of the resurrection. It demonstrates the role of God in performing a deed that no man could make happen. It points to the hope and promise of new life and rebirth for those who walk with the Lord.

The Paschal candle is lit from a new fire during Easter Vigil, which takes place at church the evening before Easter Sunday. It's a beeswax candle that is marked with the year, a cross and the Greek letters Alpha and Omega, which represent the beginning and the end. The Paschal candle is then used to light smaller candles held by the members of the congregation to represent spreading the light of Jesus to those in attendance and beyond.

Easter occurs during the spring, which has a lot to do with the fertility aspect of Easter symbolism.

Chicks are a common symbol of Easter, as illustrated by the popularity of Peeps marshmallow candy. Because baby chicks are born by hatching from an egg, they symbolize new life and fertility, which is strongly associated both with Easter and the spring season overall. Other baby animals are also sometimes considered to be Easter symbols.

Because rabbits are so fertile and baby bunnies abound during the spring, they have long been viewed to symbolize fertility. That's how bunny rabbits became so strongly associated with Easter. The legend of the Easter bunny started with the idea that a rabbit would carry baskets full of eggs to share. That tale has evolved into the modern Easter bunny and associated treats.

Butterflies are symbols of the resurrection of Jesus. Just as butterflies emerge from a chrysalis in which they are hidden away, Jesus emerges from the tomb three days after being laid to rest in it. They also represent the transformation the Christian faith can lead to, through the grace of God.

The lamb symbolizes Jesus himself. As the son of God, Jesus was sent to Earth to provide for the forgiveness of the sins of all mankind. He is, in essence, the embodiment of a true sacrificial Paschal lamb in human form.

There are some other interesting and enduring symbols of Easter. Explore some facts behind Easter traditions by looking at these symbols.

Eggs are a universal symbol of fertility. That's a big part of why they are considered a symbol of Easter and where the tradition of decorating Easter eggs came from. However, there is also a strictly religious element of their symbolism. Eggs must be cracked open for new life to emerge, just as Jesus' tomb was opened by God so that he could emerge after being resurrected. As a result, Easter eggs symbolize both the tomb of Jesus and his resurrection.

New outfits for Easter are symbolic of rebirth and new life. Additionally, thanks to a long-standing superstition, many people believed that wearing new clothes to church on Easter Sunday would bring good luck for the coming year. Elaborate Easter bonnets became part of the tradition over time. This gradually led to the tradition of church-goers parading through the streets after services ended to show off their finery.

Legend has it that soft pretzels were created during the 600s by a monk, as food to eat during Lent. At this time, Catholics weren't allowed to eat eggs, fat or milk during the 40-day fast for Lent. Pretzels require only flour, salt and water. Their shape is said to represent a common prayer position of the time (arms crossed in front with hands placed on shoulders). They are a traditional Lent food in many parts of the world, even though the fast rules have now been significantly relaxed.

Now that you know about the symbolism surrounding some of the most important Easter symbols, take the time to learn even more about this holiday and celebration. Start by discovering some of the most popular Easter traditions from around the world. You may even want to share some fun lighthearted Easter puns with your friends and family when you gather together to celebrate Easter.