While the history of the United States of America might not go back as far as some other countries, there are a number of important U.S. symbols that stand for the principles of freedom and democracy upon which the country was built. Discover 15 significant American symbols and how they came to hold such great meaning. 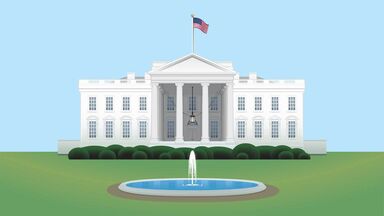 Download a printable chart featuring pictures and names of 15 American symbols. Learn more about each symbol below.

Some of the most recognizable American symbols can be traced back to the earliest days of the country.

Often referred to as Old Glory, the American flag is an enduring symbol of the United States of America. The current flag's 50 stars represent each of the 50 states. The 13 stripes of the flag represent the original 13 colonies, which made up America at the time the young country declared its independence from England. The original flag had 13 stars, but it has been adjusted throughout history as more states became part of the country.

The White House has been an American symbol since 1800. George Washington oversaw the White House's construction but never lived there. It has been the official residence of every other United States president, in spite of suffering fire damage a few times. It is a significant landmark in Washington, D.C., as well as a focal point of the U.S. government. The president works from the Oval Office in The White House. The building is a symbol of democracy recognized throughout the country and around the world.

Like the White House, the United States Capitol has been an important American symbol since 1800. The U.S. House of Representatives and the Senate are housed in the Capitol, so this historically significant building is where the legislative branch of government does its work. The most easily recognizable aspect of the Capitol building is the impressive dome that adorns the structure.

Great Seal of the United States

The Great Seal of the United States is the emblem of America. There is only one official seal in existence and it is operated solely by the U.S. Department of State. Its use must be authorized by the Secretary of State. The design includes an eagle, the number 13 (standing for the original colonies) and the phrase e pluribus unum, which is a Latin phrase that means, "Out of many, one."

There are many historically significant monuments in Washington, D.C. They serve as important symbols of the country.

The Lincoln Memorial stands opposite the Washington Monument on the edge of the National Mall. It commemorates the life and accomplishments of Abraham Lincoln, who served as the 16th president of the United States of America. Its construction began in 1914 and it was completed in 1922. Many important events in American history have taken place here, including Dr. Martin Luther King's 1963 I Have a Dream speech.

A tribute to Thomas Jefferson, America's third president, construction began on this memorial in 1939. It opened to the public in 1943. It is designed in the Neoclassical style, which Jefferson himself first introduced to the United States. Jefferson was an architect before becoming a Founding Father, and so the memorial's design honors his contributions in that field as well as his work as a statesman.

Dr. Martin Luther King, Jr. is remembered among the most prominent leaders of America's Civil Rights Movement. His life and legacy are honored with a memorial adjacent to the National Mall. The official address is 1964 Independence Avenue, which symbolizes the role Dr. King played in setting the stage for the Civil Rights Act of 1964 to be enacted. The memorial stands as a tribute to his legacy, which focused on freedom, justice and equal opportunity for all people.

Monuments Located Elsewhere in the U.S.

Not all of America's important monuments are located in Washington, D.C. There are symbols of America in other locations.

Inscribed with, "Proclaim Liberty Throughout All the Land Unto All the Inhabitants thereof," the Liberty Bell has long been a symbol of American freedom and democracy. After more than 90 years of use in Pennsylvania's State House, now referred to as Independence Hall, the bell developed a crack, and further cracked while in the process of being repaired. It was not put back into active use after that time but instead became a beloved American symbol. The original Liberty Bell is now on display in Philadelphia.

In South Dakota, the Mount Rushmore National Memorial stands as a tribute to four of America's presidents: George Washington, Thomas Jefferson, Theodore Roosevelt, and Abraham Lincoln. Their faces are carved into the stone face of Mount Rushmore itself, serving forever as a monument to the leadership and contributions of these early leaders of the United States.

A gift from France to the United States in the 1800s, the Statue of Liberty still stands today in New York Harbor. Often referred to as Lady Liberty, this lovely statue was dedicated in 1886, then became recognized as a National Monument in 1924. She is a symbol of democracy, freedom, hope, and liberty. The statue's message inspires not just the people of the United States, but also people around the world.

Animal and Plant Symbols of America

A few animals and plants are key American symbols.

The American bison was designated as the country's national mammal in 2016. Bison have lived in North America since prehistoric times, though they were at risk of extinction. Bison have lived on the land that makes up Yellowstone National Park continuously since prehistoric times. Their continued presence there and elsewhere is due to conservation efforts undertaken by the United States Department of Interior (USDOI) in partnership with various states and Native American tribes. A total of 17 Bison herds now thrive on land managed by the USDOI in 12 states.

In 1782, the Founding Fathers of the United States of America chose the bald eagle to be the country's national bird. It is visible as part of many governmental objects, including coins, paper money, the Great Seal, the military's insignia, the president's flag, and many others. It is also featured in many government buildings and appears on official government documents.

The oak tree was officially designated as America's national tree in 2004. The tree was selected through a democratic process, as Americans of all ages were invited to vote on which tree should be selected. The vote was overseen by The National Arbor Day Foundation. The results were documented in the Designation of National Tree bill, which was passed by the 108th Congress of the United States of America. As a result, the U.S. Code was amended to designate the oak tree as the country's national tree.

The rose is the national flower of the United States. In 1986, President Ronald Reagan issued a proclamation designating the rose as the country's national flower. Fittingly, this announcement was made in the White House Rose Garden. There is fossil evidence that roses have been in what is now the United States of America for many millennia. Today, there are more than 20 native species of wild roses in the country.

These are among the most widely recognized American symbols of freedom. Each of these symbols represents America in its own unique way. Now that you're familiar with a selection of famous American symbols, take the time to learn more about the country. Start by reviewing this list of words that describe the United States. From there, explore some facts about the Declaration of Independence. Then, discover a few common governmental acronyms, such as POTUS, FLOTUS and SCOTUS.