15 Industrial Revolution Inventions That Made History 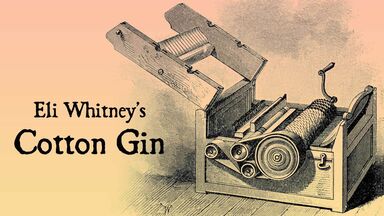 The first industrial revolution started in approximately 1760, lasting throughout the 18th century and into the 19th century.

James Hargreaves invented the spinning jenny in 1764. This multi-spindle spinning machine greatly sped up the process of producing yarn needed to manufacture cloth. Hargreaves patented the invention in 1770.

While steam engines were invented well in advance of the Industrial Revolution (1698), James Watt invented a way to greatly improve their efficiency by using a separate condenser. He came up with the idea for what became known as the Watt steam engine in 1765. Within 11 years, the first engine was built and put into use.

Edmund Cartwright invented the power loom. He built the first prototype of the power loom in 1765. He continued to improve the process through 1788, receiving several patents along the way. He opened a factory using his design paired with steam power.

Eli Whitney was granted a patent on the cotton gin in 1794. The machine that Eli Whitney invented revolutionized cotton production by automating the process of separating cotton strands from seeds. It led to the mass production of cotton fabric.

In 1802, Richard Trevithick, a mining engineer, patented what he called a high-pressure engine. This device became the first steam-powered locomotive engine on rails. It was based on the design of the Watt steam engine. The device was functional, yet cumbersome. It paved the way for modern steam locomotion.

In 1809, British chemist Humphrey Davis invented the first arc lamp. He did so by using strips of charcoal as electrodes to connect two wires to a battery. At the time, these lights were not widely adopted as they were costly and impractical to operate at the time. Within 70 years, following the invention of the generator and innovations to the design, arc lamps came to be used for streetlights.

In 1814, George Stephenson built what is considered to be "the first fully effective steam locomotive." This locomotive was able to travel four miles per hour while hauling eight wagons loaded with 30 tons of coal. Stephenson named the locomotive Blücher, in honor of the Prussian general with the same last name who would go on to help the British defeat Napoleon the following year at Waterloo.

In 1828, James Nielson patented a hot blast furnace that came to be widely adopted throughout the iron industry. Neilson's hot blast furnace greatly improved the efficiency with which iron could be smelted. The furnace used an extremely hot temperature (hence the use of "hot blast" in its name), which led to faster processing that could be done with fewer materials and cheaper fuel.

In 1831, Michael Faraday invented the Faraday Disk, which became the first electricity generator. He was able to create this divide after discovering that the motion of a magnet when placed inside coiled wire causes an electric current to flow to the wire. This innovation ultimately led to the design of modern electric generators.

In 1837, John Deere invented the steel plow. After the blacksmith moved from Vermont to Illinois, he recognized that farmers were finding it difficult to work the difficult prairie soil with their cast-iron plows. John Deere set out to come up with a solution, which led him to craft a different shape of plow using what started out as a steel saw blade. By 1849, he was producing 2,000 of these early steel plows per year while also continuing to innovate.

In 1856 and 1860 respectively, Henry Bessemer patented a unique steel production process and a device called the Bessemer Converter. As a result, he came up with a unique approach to mass-produce steel efficiently and effectively. His steel production company, Henry Bessemer & Co., was able to beat out competitors on price due to the efficiency of his process and converter. He then licensed the technology to other steel manufacturers.

Thomas Edison invented and patented incandescent light bulbs. He received related patents in 1879 and 1880, which led the way for these illuminating devices to be mass-produced.

The Second Industrial Revolution continued through 1914. It is sometimes referred to as the Technological Revolution.

In 1903, Wilbur and Orville Wright invented the first airplane that was successfully able to fly. The Wright brothers experimented with gliders before designing their own gasoline engine, which is what ultimately powered their first successful airplane flight.

The Ford Motor Company developed a moving assembly line that could be used in large scale manufacturing. It was implemented in 1913, further automating car production by moving in-production vehicles to workers rather than requiring workers to move around them. This procedure made it possible to build a Model T in 90 minutes.

Foundation of Modern Business and Industry

Incorporating invention ideas into kids' activities can help spur creativity in a future great inventor! Great inventions, like those of brilliant woman inventors, are all based on practical applications of scientific principles. The path to becoming an inventor begins with learning key steps in the scientific method. From there, the possibilities are endless. Explore more modern advances with 10 Elon Musk inventions.