Have you ever wondered why some animals are brightly colored while others blend into their surroundings? Why do frogs hibernate, and why do blowfish puff up? These are all adaptations that animals have made based on their environment and needs. Learn examples of animal adaptations in various habitats, and what purpose each adaptation serves. 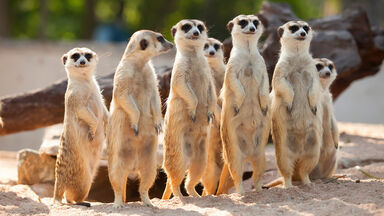 For animals closer to the bottom of the food chain, physical adaptations are important for self-protection. Whether these adaptations help them hide, scare predators away or even taste bad depends on each animal’s traits and environment. Take a quick trip around the world to see some amazing animals’ abilities to keep from becoming prey.

With their tiny bodies and thin skin, African spiny mice seem like the perfect prey for desert animals. But the thinness of their skin is actually an effective adaptation that allows these mice to heal almost immediately. While other mice may die from injuries after a bout with a fox or owl, African spiny mice heal much more quickly than any other mammal. They are able to regenerate skin tissue itself, as well as hair follicles and fur, rather than replace it with scar tissue.

You may have heard of a lizard regrowing its tail after losing the original tail to a hawk or cat. But did you know that some amphibians can regenerate other limbs, including jaws or even retinas? Newts and salamanders are the most talented amphibians when it comes to regeneration, and are able to escape certain death by abandoning their old body parts.

Meerkats live in the savanna biome, where there are predators everywhere. They live in colonies with one meerkat acting as a lookout for the rest of the group. Scanning long distances through the savanna sun is no problem for these little animals, since they have dark fur around their eyes that reduces glare (much like eye paint for football players). They can see danger coming from every angle – even before they’re spotted by the predators themselves!

Pufferfish, also known as blowfish, are easy targets for predators. They are slow and easy to spot in the ocean. However, if a predator gets too close, the pufferfish can ingest water and air very quickly, making them several times larger than their normal size. And if the newly huge pufferfish doesn’t scare a predator away, the pufferfish’s poison will do the job. It releases tetrodotoxin, which makes them taste bad and can kill a larger fish.

Not every animal needs to adapt to steer clear of predators. Some animals, especially apex predators, adapt in order to hide from their prey before striking. Others have developed the ability to survive eating toxic animals to stay alive. See how these animals have adapted in unique ways to make sure they can hunt effectively.

Kingsnakes Are Immune to Venom

Kingsnakes are known as “kings” because they eat other snakes. Sometimes, these snakes include highly venomous snakes like rattlesnakes or cottonmouths. One bite from these smaller snakes would kill another predator. However, kingsnakes, which are non-venomous, have developed an immunity or tolerance to snake venom. This enables kingsnakes to eat prey that other predators can’t, which is beneficial in sparsely populated habitats.

Octopuses are extremely intelligent and skilled at escaping predators. When they can’t outsmart a bigger animal, they quickly change their color to blend into their surroundings. This rapid camouflaging can make octopuses virtually disappear by looking like rocks, coral or even other sea animals.

Tigers Disappear in the Shadows

Tigers are famous for their beautiful stripes. But those stripes aren’t just decoration: they help tigers lurk in shadowy jungles. Their stripes camouflage them in the shadows cast by tall trees and branches, making them almost invisible to unsuspecting prey.

It’s easy to think that camels are “made for the sand,” but in reality, they’ve successfully adapted to their harsh desert environment over millions of years. Camels have long eyelashes (and a third eyelid) to keep sand out of their eyes and wide feet to distribute their weight evenly on the sand. They have thick fur in sun-facing parts of their body for shade, and thin fur in other places to allow heat to easily escape their body to cool off. And don’t forget their signature hump, which is full of fat that they can metabolize when there is no food or water around.

Another desert-adapted animal is the dorcas gazelle, which can live for a very long time without water in Northern Africa. They extract water from the desert plants they eat, and conserve their energy during the day. Dorcas gazelles even extract water before urinating so their urine comes out as solid pellets of uric acid.

Dolphins are an example of animals who have adapted to human presence in their environment. Irrawaddy (and in some cases, bottlenose) dolphins have been known to work with fishermen in a process known as “cooperative fishing.” The dolphins chase fish to the boats and signal where the fishermen should throw their nets. In exchange, the fishermen allow the dolphins to catch some of the fish they bring to the boat. The cooperative relationships between fishermen and “their” dolphins can continue for many years.

You may know that bears hibernate during the winter, as do snakes, groundhogs and bats. But did you know that wood frogs can actually freeze their blood during cold seasons? Wood frogs are the only frogs found north of the Arctic circle, and thanks to an antifreeze-like chemical in their blood, they can stop their hearts and form ice crystals inside their body. They then awaken from this hibernation state when spring arrives.

Adaptations to Pass on Genes

Every animal’s highest priority is to stay alive long enough to reproduce and pass on their genes. That’s why animals adapt through the process of evolution. Adaptations allow animals to camouflage themselves, attract mates, catch prey more easily, and stay alive in extreme temperatures. Animals that have adapted to their environments are more likely to mate and reproduce, which perpetuates their species. These animals have special ways of attracting a mate and ensuring that their babies stay alive.

Competition for mates with desirable traits is fierce among the birds of paradise. Primarily located in New Guinea and eastern Australia, these colorful, strangely decorated male birds learn to perform mating dances at a young age. Female birds, who are more plainly colored to blend in with their surroundings, must decide which male has the best traits for her offspring. The best dancer wins the ability to pass on their genes.

Some species of sharks lay eggs, while others give live birth to two or more pups at a time. Great white sharks, one of the largest predatory sharks in the world, gestate for over a year before giving birth to three-foot-long pups. The sheer size of a newborn great white shark means that its mother does not need to care for it after birth – it is already a formidable killing machine.

Spiders lay hundreds of eggs at a time, with some of their spiderlings hatching earlier than others. In those cases, the baby spiders grow at different rates, resulting in spider cannibalism from the older babies toward the younger ones. Fewer spiders are able to reproduce if they are eaten as babies. Black widow eggs are unique in that they hatch and develop at almost the same time, making it less likely for them to cannibalize any younger siblings.

Animals adapt both physically and behaviorally, depending on their environments. Animal adaptations help animals stay alive either by protecting them from predators or making it easier to catch prey. These animals have adapted to their environments, including climate, terrain, and available plantlife. Explore another animal's adaptations with cool vampire squid facts. Then, take a look at some fascinating examples of plant adaptations that help them survive in their environments as well.