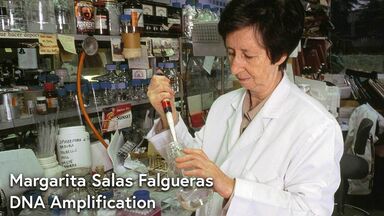 Innovative women created a number of incredible inventions during the late 20th and 21st centuries.

Jyothikaa Ramann, a 10th-grade student from Dougherty Valley High School in California, received the Most Innovative Award at the 2020 California Invention Convention. She invented a device that can be attached to a person's collar that will provide feedback in the form of a small buzz whenever the wearer starts to slump rather than maintaining proper posture. Basically, it helps build good habits and improve health by providing a simple reminder to stand up straight.

Designer and researcher Charlotte McCurdy used algae to develop a material similar to plastic, then used that material to design a carbon-negative raincoat. The raincoat design won first place in the "experimental" category" in Fast Company's 2019 Innovation by Design awards program. Through her industrial design work, McCurdy seeks to demonstrate practical solutions to the threat of climate change.

In 2000, Belgian inventor Ann Lambrechts came up with an invention that continues to revolutionize the construction industry. She created a way to strengthen reinforced concrete and make it more stable by adding steel wire to it. This is an alternative to reinforcing concrete with rebar, which is bulky, expensive and puts significant limitations on design. Using steel wire opens up architectural possibilities while also reducing construction costs. Lambrechts received the 2011 European Inventor award for this innovation.

Sara Blakely, founder of SPANX, came up with her invention while getting dressed for a party. Her wardrobe lacked an undergarment that would provide her with a smooth look under slacks, so she was inspired to snip the feet off a pair of control-top pantyhose and used them. Thus began the idea for SPANX, which began in 1998 with an initial $5,000 investment. The company offers a complete line of undergarments and clothing. In 2012, Forbes named Blakely the youngest self-made female billionaire in the world.

Between 1997 and 2017, Margarita Salas Falgueras, Ph.D., secured four patents that served to improve DNA testing. Prior to her inventions and innovations, large amounts of DNA were required in order to do genomic testing. She developed a reliable and accurate method to replicate DNA quickly, something that led to significant advances in forensic science, medicine (especially oncology) and anthropology. In 2019, the European Patent Office recognized her with a lifetime achievement award.

Ophthalmologist Dr. Patricia Bath invented the Laserphaco Probe in 1981 and patented it in 1988. This laser tool greatly improved cataract surgery by making it less invasive and more precise. Not only is Dr. Bath among the most influential Black women inventors of the modern era, she was also the first female faculty member in the College of Medicine at the University of California Los Angeles (UCLA) and the first female chair of the Charles R. Drew/UCLA Medical Education Program.

In 1979, Lisa Lindahl patented the sports bra, which was first sold under the name Jogbra. She came up with the idea in 1977 because she could not find a bra that met her needs as a runner. She and friend Polly Smith designed the bra to provide proper support without chafing or slipping straps, using breathable fabric. Along with Linda Miller, Lindahl founded Jogbra, Inc. to bring the product to market. They ultimately sold the company to Playtex.

Marie Van Brittan Brown invented (1966) and received a patent (1969) for the first home security system. She worked late nights as a nurse and was looking to improve the safety of her home. Brown, with assistance from her electronics technician husband, created and installed the system in her home. It functioned as what came to be known as CCTV (closed-circuit television system), which she is also credited with inventing. She is considered a visionary African American inventor.

In 1965, Stephanie Kwolek, a chemist at DuPont, conducted research on polyamide molecules that led to the invention of Kevlar®, a truly revolutionary industrial fiber. Kevlar has five times the strength of steel while being lighter than fiberglass. Kevlar was first used in the 1970s in racing tires (to replace much heavier steel). It is now used in many commercial products, including life-saving items like body armor, bulletproof vests and helmets.

Not all impressive creations created by female inventors took place after the middle of the 21st century. Discover some earlier innovations.

In 1946, Marion Donovan invented the waterproof diaper cover, a creation for which she received a patent in 1951. She used shower curtains to make the covers at first, though ultimately used the same nylon fabric parachutes are made from when she took the product to market. The product, which Donovan called "the Boater" was first sold at Saks Fifth Avenue in New York, where it was well-received by customers. She also came up with the idea of disposable diapers, but the market was not yet ready for that product.

In 1903, Mary Anderson received a patent for a "window cleaning device." She was inspired to invent this device as a result of traveling by trolley and streetcar in New York City. She observed that drivers had no way to clear the windows from inside. During snow or rain, drivers had to get out of the vehicle to clean the windows or drive with their head hanging out of a window. She came up with an innovative solution to that problem, which became the first effective windshield wiper.

Ironing boards were first patented in 1858. In 1892, dressmaker Sarah Boone received a patent for a new ironing board design. Her design was crafted specifically to simplify the process of ironing the bodice and sleeve portions of ladies' dresses. Boone, who had been born into enslavement, was freed along with her husband shortly after their 1847 marriage. She is believed to have been the second African American woman to receive a patent in the United States.

During the early 1880s, Josephine Cochrane invented the first dishwasher that became a commercial success. After working for a few years to perfect the design, she filed for a patent in 1885 and received it in 1886. She founded Cochran’s Crescent Washing Machine Company, through which she brought the product to market. It quickly caught on with businesses, though it was not widely adopted in the consumer market. (It was the 1950s before in-home dishwashers became commonplace.)

Not much is known about Judy Reed, other than that the Washington, D.C. resident applied for and received a patent for her dough kneader and roller device. Her device was not the first dough kneader or roller but rather improved previous designs by ensuring more even mixing. She is the first known Black woman to receive a patent in the United States.

In 1843, Nancy M. Johnson of Philadelphia, Pennsylvania patented the hand crank ice cream freezer. It featured a center paddle and a hand crank on the outside of the container. It offered a much easier way to make ice cream versus using a spoon to stir it. A similar version to her original device is still sold in modern times, as some people prefer hand-crank rather than electric ice cream makers.

What Does the Future Hold?

These are just a few examples of incredible inventions conceptualized and brought to life by remarkable women. Each of these innovations leads to new ways of doing things. Learn more about amazing inventions by exploring some of the great inventions from the Industrial Revolution.

The possibilities of tomorrow remain to be seen. Will you be the next woman to come up with an incredible invention? Focus on what's possible and take the time to learn the scientific method. That way, you'll be properly prepared to research and develop your ideas in the future. You might also want to read about other female firsts, like the first women doctors around the world. You can also continue learning about amazing women with information about Amelia Earhart.