Examples of Slang Words From the Past and Today

Every generation has its own slang — very informal language or specific words used by a particular group of people. You'll usually hear slang spoken more often than you'll see it put in writing, though emails and texts often contain many conversational slang words. Slang sometimes gets a bad rap for being inappropriate or incorrect, but aside from being highly creative, it shows that the English language is constantly evolving over time. 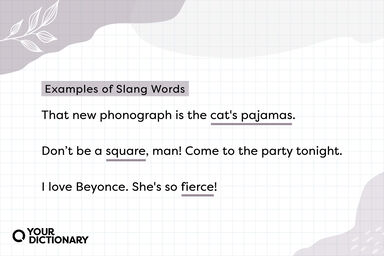 Slang changes all the time, so it’s good to understand the basics. But a list of modern slang terms (courtesy of Millennials and Gen Z) can get you started.

BAE is a term of endearment, meaning "before anyone else.” It’s commonly used between romantic partners, but can also be used between close friends.

Example: Bae, you're the best.

When someone is basic, you’re describing them with a put-down for a conformist (or normie), or something that’s so common that it’s boring.

Example: People who only drink pumpkin spice lattes are so basic.

Saying “Bye Felicia” is a fast way to tell someone to go away. It comes from the 1995 movie Friday.

Example: I know you're just copying my style. Bye Felicia.

Sometimes something is so funny that you may die laughing. Not literally, of course — and the slang dying isn’t literal either. It just means that you’re LOLing a lot.

If something was epic, it was highly enjoyable.

Example: That skateboard trick was epic!

If someone's extra, it means they're way too dramatic. They may dress a little extra or act a little extra, but either way, they’re just a bit much.

Example: My boyfriend is so extra that he got me flowers, stuffed animals, candy, cards, and jewelry — and it wasn’t even a holiday.

The term fierce signifies a strong, independent person. It can also refer to someone who dresses in a bold and fashionable way.

Calling someone a goat isn’t a compliment, but when you call them the GOAT, you’re saying that they’re “the Greatest Of All Time.” It’s the perfect term for stellar musicians and athletes, or just when you want to make your BFF feel good about themselves.

Example: With over 240 wins and 15 Pro Bowls, Tom Brady really is the GOAT.

If someone or something is low key, it means it's being done under the radar or they don't want anyone to know. The opposite is high key: not secret, completely out in the open.

Every generation has a way of saying “cool,” but the modern way of saying it is on point (or even on fleek). It can apply to a great dance move, a killer outfit or even perfectly groomed eyebrows.

Example: Her accessories are on point. She looks great.

To read someone means you're calling them out for their bad behavior. You may also see read in the phrase “leave on read” — to see someone’s text message but not answer it.

When you’re feeling salty, you’re angry or bitter about something. Those who are especially salty may hold grudges for a very long time.

Example: Why are you so salty? I said I would share if I win the lottery.

A savage person isn’t afraid of hurting others’ feelings with their insults. Also known as roasting, this attitude can be both funny or argumentative, depending on the context.

Example: Jimmy Kimmel's monologue about the president was savage.

Short for "romantic relationship,” ship is typically used as a verb meaning “to support two people being in a relationship.” You’ll find it in intense fandoms as well as excited friends who are setting their buddies up to date.

Example: Everyone ships Mike and Bella, but they say they're just good friends.

The term spilling the tea refers to telling someone the juiciest or most dramatic gossip. You can also sip the tea — enjoying gossip without telling anyone you know it.

Example: What’s the deal with Wendy and Aaron? Spill the tea!

If someone's thirsty, it means they're a little too eager or even desperate — often in the context of being lustful. A thirst trap is a very attractive person who wants attention for their looks, typically on social media.

Example: Nellie is so thirsty that she’s got profiles on ten different dating apps.

To throw shade means to insult or say something unkind about someone. It’s a form of reading a person, but it may not be as accurate (or helpful).

Example: Paul threw some serious shade when he called Byron an ugly kiss-up.

Some slang words that were once popular are no longer as common. Depending on the decade, these phrases appeared quite often in writing and conversation.

This 1920s slang term was commonly used by flappers to mean that something was exciting, new, or excellent. Though it doesn't make much sense, it does use vivid imagery.

Example: That new phonograph is the cat's pajamas.

When people in the 1930s got excited, they’d often blow their wig. This term can be literal or figurative, depending on the state of one’s wig.

Example: Don’t blow your wig — it’s easy to get ketchup stains out of fabric.

If cat’s pajamas isn’t your speed, maybe you’d prefer the 1940s slang term killer diller. It means something is as good as it can be, no improvements needed.

Lame, boring, buzzkill — all sentiments perfectly summed up in the 1950s term square. Even if you can’t be the Big Man on Campus, you definitely don’t want to be called square.

Example: Don’t be a square, man! Come to the party tonight.

When something was groovy in the 1960s, it was both very cool and also not a big deal at all. Nice and mellow, no drama, much like the flower power sentiment of the decade itself.

Example: I’m feeling groovy after going on a date with such a pretty girl.

Want to tell someone to shut up without telling them to shut up? Try out the 1970s slang phrase sit on it, popularized by Happy Days’ Fonzie (even though it was set in the 1950s).

Example: You want me to give you another ride for free? Sit on it!

Don’t Have a Cow

Often used to try to calm someone down, don’t have a cow was popularized by the TV show The Simpsons in 1980s slang. Though you might still hear Bart say it in reruns, it's no longer very common to hear in conversation.

Example: Don't have a cow, Mom! I didn't eat all the ice cream.

Talk to the Hand

Example: Talk to the hand, ‘cause the face don’t want to hear it anymore.

As each generation comes of age, it adds new and creative slang to the culture. But sometimes, the slang word is a reused word with a new meaning. For example, busted can mean “broken” or “ugly,” sick can mean “ill” or “very cool,” and hip can mean “trendy” or “fashionably un-trendy.”

While the word stays in usage, it can lead to some miscommunication between older and younger speakers. That’s why understanding the most current slang is a good idea — whether you’re in the younger generation or not.