As a well-known figure of the Civil Rights Era, Rosa Parks had a lot to do with the fight for equality for Black Americans. If you're looking for inspiration to keep you motivated in today's struggles, reflect on some key Rosa Parks quotes. Her action of refusing to move to the back of a bus in Montgomery, Alabama may be what she's most known for, but she had a lot of powerful things to say. 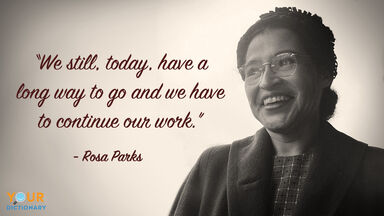 Who Is Rosa Parks?

Rosa Louise McCauley Parks (February 4, 1913-October 24, 2005) was an African American civil rights activist who is often referred to as the mother of the modern-day civil rights movement in the United States. Some even refer to her as the First Lady of civil rights. She is most famous for her December 1, 1955 refusal to obey bus driver James Blake's demand that she relinquish her seat to a white man. She was arrested for her civil disobedience, but the stand she took ultimately led to the desegregation of Alabama's public buses.

Rosa Parks has been the subject of many books, magazine articles and even movies. She also wrote her own book, Rosa Parks: My Story (1992), and gave many speeches during her lifetime. Discover a few of the powerful Parks quotes that provide insight into her role during the Civil Rights Era of the 1950s and beyond.

Perhaps Parks' most powerful quote was just a few words: "No, I will not." That's how she recalled responding when asked to give up her seat on the bus. Parks often spoke publicly about that fateful day, as well as her overall experience as a Black person in the Deep South during the Jim Crow era.

Parks remained involved in and passionate about civil rights throughout her lifetime. She often spoke about her past experiences, from her early days as the grandchild of enslaved people to her role with the Freedom Fighters. She remained committed to sharing what she, along with other civil rights activists of her day, experienced as she sought to inspire a new generation to carry on.

The Drive for Equality

Rosa Parks' actions on a bus in Montgomery, Alabama in 1955, along with what she did throughout the remaining 50 years of her life, emphasized her determination to bring about equality for Black Americans. She is an example of how one individual can play a pivotal role in bringing about social justice. Review Rosa Parks' biography to learn more about her life and impact. Of course, Parks is not the only person who played an important role in desegregation. Learn more about the time by reviewing a timeline of significant events of the Civil Rights Era.