20 Smallest Countries in the World at a Glance

The largest countries in the world get a lot of attention, but considering the smallest ones is also quite interesting. You just might be surprised to find out what's the smallest country in the world by population and area both. It's a place you've almost definitely heard of, but you may not even realize that it's actually a country. Ready to find out? 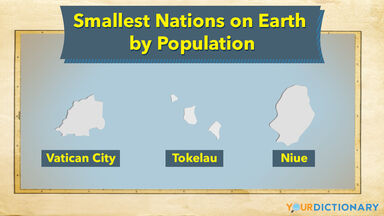 Smallest Country in the World

With just over 800 residents, Vatican City is the smallest country in the world by population, as well as by area. Its official name is Vatican City State, and it is also referred to as the Holy See. While you may think of Vatican City as being part of Rome, it is actually a sovereign nation.

Vatican City is not the only small country on planet Earth. Discover the top 20 smallest nations in order by population. When you review the following list, keep in mind that population statistics can shift from time to time. Things like birth rates and the number of people moving in or out of a country can quickly cause population statistics to change. The data used to compile the lists below are current as of mid-2021.

Considering country size by area requires looking at the actual amount of land within the borders of each nation. This generally remains constant, unless a nation annexes land from another country or part of it is annexed. Notice that the top two smallest countries by area are also the top two by population. Beyond that, the population and area lists do not mirror each other.

Insights About the Smallest Countries

Were you surprised by what nations are on this list of the smallest countries? Isn't it interesting that the order isn't the same for area and population? That means that some countries have more people per square kilometer than others. This could indicate that a country tends to be very crowded, or it could mean that the majority of the land in the country is inhabited. When the reverse is true, such that a country with a large area has fewer people per square kilometer, that could mean that much of the land in the country is wilderness or otherwise unpopulated.

Learning About the World's Countries

Now that you know what is the smallest country in the world by both area and population, it's a great time to learn more interesting facts about different countries. Start by exploring this interesting list of all of the countries in the world. After you've familiarized yourself with that list, review the various abbreviations used for different nations. You may also be interested in finding out about the most common languages spoken in the world. When the entire world is your topic, there is plenty to learn and explore.