25+ Kermit The Frog Quotes Everyone Can Relate To

If he wasn't so obviously a puppet (well, really a muppet), one just might think that Kermit the Frog is one of the greatest philosophers of modern times. He certainly has some insightful words of wisdom to share. Relax and improve your outlook on life by perusing some truly relatable Kermit the Frog quotes. 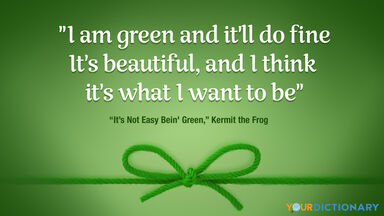 Kermit the Frog Quotes From Movies and TV

From Sesame Street and The Muppet Movie and its sequels to beloved songs and social media, Kermit the Frog is full of inspiration, wisdom and love. Let his words from your TV set or big screens around the world lift you up and help you see what is possible in life and love, all from the point of view of a humble talking frog.

Kermit the Frog Quotes About Being Green

Kermit is well known for sharing sage advice with Seasame Street viewers when he sang "It's Not Easy Being Green," a tune that quickly became a classic children's song. What a powerful statement to encourage kids (and grown-ups too) to understand that it's perfectly fine for them to be their own unique selves. The lyrics of this simple yet powerful song can easily stand on their own as quotes. Kermit himself referenced the tune on Twitter.

Kermit Quotes From It's Not Easy Being Green (the Book)

Even more powerful Kermit sayings were compiled in the book It's Not Easy Being Green: And Other Things to Consider. A few of Kermit's words of wisdom are included in this book, which is written by his creator Jim Henson.

Kermit Quotes About Creativity and Friendship

In 2015, Kermit the Frog shared his unique insights in his very own TEDx Talk. Titled "The Creative Act of Listening to a Talking Frog," Kermit's TEDx presentation focuses on creativity, which is something he credits largely to the influence of friends in his life. Discover a few quotes from his moving speech.

Since Kermit first hit the air on Sesame Street, way back when the oldest members of Generation X were the right age for the show, the character's impact has been almost universal. He didn't just influence that generation of kids, but also their parents and grandparents too, along with all of the generations that have followed. His influence and popularity continue today, as evidenced by his active presence on social media and status as a TEDx presenter. Kermit's words are such a source of motivation for so many people of all ages that they're used in everything from birthday greetings to internet memes. With that in mind, consider the character's reach in light of intrinsic motivation examples that impact behavior. Then, the philosophical question to ponder becomes, "What would the world be like without Kermit the Frog?" What would it be like, indeed?