3 Main Types of Faults in Geology

Tectonic plates are always moving under your feet. This constant lithospheric motion results in surface fractures in the Earth’s crust, which are called faults. Large faults also appear in the boundaries between tectonic plates. Keep reading to learn more about the three main types of faults – normal, reverse, and strike-slip faults – as well as places in the world where you can find them. 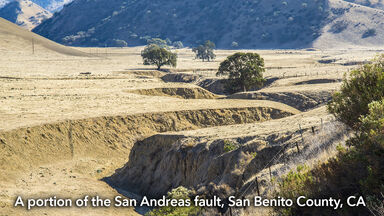 Parts of a Fault

Faults consist of two rock blocks that displace each other during an earthquake or regular tectonic movement. One block is called the hanging wall, and the other is the footwall. Understanding the parts of a fault can help you identify what type of fault you’re seeing.

The main parts of a fault are:

The behavior of each of these parts helps earth scientists identify faults as normal, reverse, or strike-slip. Once you know what type a fault is, you can predict what can happen there during an earthquake.

Normal faults create space. These faults may look like large trenches or small cracks in the Earth’s surface. The fault scarp may be visible in these faults as the hanging wall slips below the footwall.

If you’re looking at a mountain that lies on a normal fault, you’ll see that the hanging wall has “dipped and slipped” under the footwall level. This gives the mountain a leaning, sloping look. In a flat area, a normal fault looks like a step or offset rock (the fault scarp).

Normal Faults Around the World

You may see additional examples of normal faults in these places:

Although reverse faults are also dip-slip faults, they behave the opposite way that a normal fault does. The hanging wall slides up over the footwall during tectonic movement in these faults. Reverse faults with a 45 degree dip (or less) are known as thrust faults, while faults with over 45-degree dips are overthrust faults.

Reverse faults look like two rocks or mountains have been shoved together. Unlike normal faults, reverse faults do not create space. They are found in areas of geological compression.

Reverse Faults Around the World

Strike-Slip Faults Around the World

The most famous example of a strike-slip fault is the San Andreas Fault. The 1300-kilometer San Andreas Fault stretches across most of California and divides the Pacific and North American tectonic plates. It is responsible for a number of smaller fault systems across the western United States.

Other examples of transcurrent faults include:

Faults mark the edges of tectonic plates and points of lithospheric stress. But they also create the beautiful mountain ranges and valleys on our planet. If you’d like to learn more about landforms and earth science, check out an article that lists examples of landforms around the world.