31 Eleanor Roosevelt Quotes to Empower and Give Strength

Throughout history, women have inspired the masses with not only their words but their actions. Eleanor Roosevelt was one such woman. This first lady tirelessly created a path toward a better tomorrow. Thankfully, Eleanor Roosevelt's quotes left a few words of wisdom along the way. 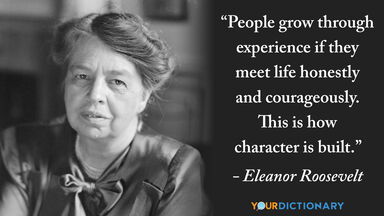 While Eleanor Roosevelt is most known for her place beside Franklin D. Roosevelt as the first lady, she was a historical hero in her own right. Eleanor worked to create many changes in the world as a first lady. She was interested in expanding women’s rights in the workforce and those of the underserved populations. Through her words and speeches, she worked to bring hope to others. See a few of her famous quotes.

Eleanor Roosevelt’s contributions to the United States didn’t die with her husband. She continued to rally for women and minorities for many years after. She wanted to inspire greatness and equality for all. She knew it was important to not wait around for others when changes were needed now. Her quotes show her fire for greatness.

Because improvement of the human condition was important to her, Eleanor Roosevelt pushed the need for human rights. She even had a chair on the United Nations Human Rights Commission. Therefore, you can find several quotes exploring her passion.

Eleanor Roosevelt used her time in office and beyond to incite a change in America. She worked with the United Nations to improve the rights and conditions of the poor and minorities. Interested in seeing more quotes from a powerful woman? Take a look at quotes by Frida Kahlo.