Inspiring the world to make changes for a better tomorrow can be tough. However, a few activists, politicians and celebrities hit the nail on the head when it comes to talking about climate change. See a few climate change quotes ready to compel you to action. 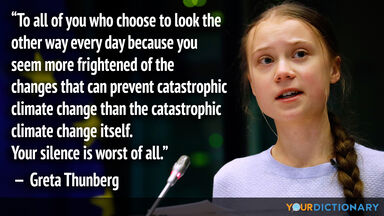 Climate change has been a hot-button issue for years. Therefore, many great leaders, presidents and CEOs have had their say about climate change. Dive into a few climate change quotes and global warming quotes from leaders around the world.

It’s not only politicians and leaders that talk about the planet. It’s activists and scientists too. The increasing heat in the atmosphere is on a collision course for catastrophic climate shifts. Learn what famous scientists and activists have to say in quotes about global warming.

Are you ready to ignite change in the world? You aren’t the only one. Dive into these famous quotes from around the world looking to make change possible.

Climate change is a widely debated topic. However, scientists all over the globe are writing reports, theses and dissertations covering this subject. Additionally, activists and politicians are working to get their voices heard. Therefore, you can find a lot of different quotes covering climate change. Need more inspirational quotes? Try out powerful Rosa Parks quotes.