Imagine being the father of the current theory of evolution. Given the divide between religion and science, you would have a lot of weight on your shoulders. And, Charles Darwin did. Through his experiments and studies in nature, Charles Darwin made a few keen observations of life, evolution and man. Explore a sampling of Charles Darwin quotes. 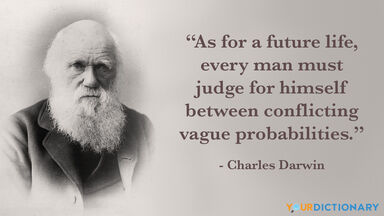 When you think of evolution, you probably think of Charles Darwin. But Darwin didn’t set out on his scientific journey to discover the theory of evolution. In fact, Darwin started out as a naturalist and scientist interested in plants and animals. However, along the way, he revolutionized the creation of man and animals. Explore some evolutionary quotes from Darwin.

During Charles Darwin’s investigation into species, one dominant theory began to take shape. It’s only the fittest that will survive. Darwin’s theory of evolution and natural selection changed the thinking of the world. In fact, he wrote 53 different books during his lifetime about his studies, including a few dedicated to natural selection. See a few quotes from Charles Darwin on the survival of the species.

During his exploration of evolution and science, Darwin stumbled onto some interesting insights about man. See this naturalist’s thoughts on man through these gems.

Charles Darwin had a love for animals. He devoted a large part of his life to studying animals and the natural world. Therefore, he had some astute observations to discuss in his letters and books. Dive into a few different Darwin quotes specifically about animals.

The Words of Charles Darwin

Though Darwin studied theology in school, he realized through his studies that species evolve. This lead to his study and presentation of evolution, natural selection and animal origins. After reading the wise words of a famous scientist, browse some empowering quotes from the famous humanitarian and first lady Eleanor Roosevelt.