Dinosaurs are huge, dangerous and extinct — yet 65 million years later, they're still good for a laugh. Puns about dinosaurs are sure to delight preschoolers and paleontologists alike, as their fascinating names are perfect for clever wordplay. Read on for 35 dinosaur puns that will leave you roaring with laughter! 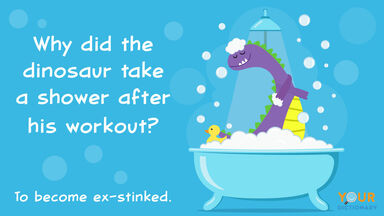 A good dinosaur pun never goes extinct! Check out these hilarious dinosaur puns that will please dinosaur fans of any age.

Most dinosaur names are made of Greek or Latin roots to describe that dinosaur's characteristics. But you can find puns in almost any dinosaur name, even when it's describing a very scary lizard!

Pterrific Puns in Other Subjects

Dinosaur puns will make you giggle, guffaw, groan, or even learn! But they're not the only type of pun for a laugh. Fans of dinosaur puns will love these science puns that are the perfect blend between silly and scientific. Or, if you're in more of a pirate-y mood, check out some pirate puns that can help with your buccaneer banter!