Depending on your purpose, you’ll want to use one of the four main types of writing styles. Each style has its own purpose, and you may find some styles are more natural for you than others. These examples and tips will help you become a pro at all four. 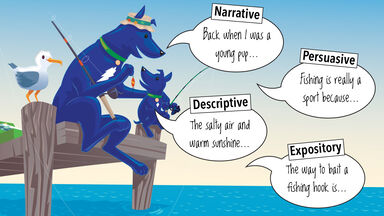 What Are the Different Styles of Writing?

There are four main styles of writing, and each style has a distinct purpose:

Understanding when and how to use these styles is mostly about knowing what you want to convey to your reader.

Great news reporting is expository in nature. It tells the facts and explains details the reader needs to understand those facts. Even better, it illuminates or “sheds light on” things the reader needs to know. A great example is the Watergate reporting done by Bob Woodward and Carl Bernstein in 1972 for The Washington Post. Notice how the reporters add detail and background information while keeping the article on-topic in this Pulitzer prize-winning example:

President Nixon's assistant for congressional relations and two officials of the President’s re-election committee were among the persons sent memos describing wire-upped conversations of Democratic Party officials, according to Alfred C. Baldwin III.

Baldwin, the ex-FBI agent who says he transcribed the wiretapped conversations of Democratic officials in the Watergate, is known to have told the FBI that memos summarizing some of the conversations were addressed to the following persons, among others:

• William E. Timmons, assistant to the President for congressional relations and the principal White House liaison to the re-election committee for matters concerning the Republican National Convention.

• Robert C. Odle Jr., a former White House aide who is director of administration for the Committee for the Re-election of the President

Tips for Writing in an Expository Style

When you use this type of writing style to create an expository essay or any other kind of expository writing, the most important thing to keep in mind is your purpose: you are writing to explain and illuminate. You can’t add your own opinion or make anything up. These tips can help you:

Narrative writing tells a story. It can be your own story, such as a memoir or a personal essay. It can also be the story of a historical event or other real-life happening. Additionally, narrative writing can be fiction, such as a short story or novel. Whether or not it really happened, this type of writing is all about presenting the story in a way the reader will enjoy and understand. The events don’t have to happen in chronological order, but they must capture and hold the reader’s attention.

In this type of writing, the goal is to tell the reader what happens in a way that is compelling. Often, this involves creating characters and describing settings in a way that makes the story more realistic. However, while descriptive details are part of narrative writing, this type of writing is not solely about description. This is about what happens in the story. You can see this in action in this example from Oliver Twist by Charles Dickens.

Oliver had not been within the walls of the workhouse a quarter of an hour, and had scarcely completed the demolition of a second slice of bread, when Mr. Bumble, who had handed him over to the care of an old woman, returned, and, telling him it was a board night, informed him that the board had said he was to appear before it forthwith.

Not having a very clearly defined notion of what a live board was, Oliver was rather astounded by this intelligence, and was not quite certain whether he ought to laugh or cry. He had no time to think about the matter, however; for Mr. Bumble gave him a tap on the head to wake him up, and another on the back to make him lively, and bidding him follow, conducted him into a large whitewashed room where eight or ten fat gentlemen were sitting round a table, at the top of which, seated in an armchair rather higher than the rest, was a particularly fat gentleman with a very round, red face.

"Bow to the Board," said Bumble. Oliver brushed away two or three tears that were lingering in his eyes, and seeing no board but the table, fortunately bowed to that.

Tips for Writing in the Narrative Style

If you’re writing a narrative, remember that you are telling a story. Keep this purpose in mind throughout your work. Consider what will make the story interesting for the reader, and include details and information that will keep your reader engaged. Here are some tips to help:

Persuasive writing is unique because it has a very clear and important purpose: convincing the reader to do something or think something. To succeed at this type of writing, you need a clear goal. Know what you want the reader to do or believe after reading your work.

Persuasive writing is only successful if you are clear about your goal and then support that goal with relevant points. This builds a case for your reader. You can see this type of writing in action in this excerpt from the Declaration of Independence:

The history of the present King of Great Britain is a history of repeated injuries and usurpations, all having in direct object the establishment of an absolute Tyranny over these States. To prove this, let Facts be submitted to a candid world.

He has refused his Assent to Laws, the most wholesome and necessary for the public good.

He has forbidden his Governors to pass Laws of immediate and pressing importance, unless suspended in their operation till his Assent should be obtained; and when so suspended, he has utterly neglected to attend to them.

He has refused to pass other Laws for the accommodation of large districts of people, unless those people would relinquish the right of Representation in the Legislature, a right inestimable to them and formidable to tyrants only.

He has called together legislative bodies at places unusual, uncomfortable, and distant from the depository of their public Records, for the sole purpose of fatiguing them into compliance with his measures.

He has dissolved Representative Houses repeatedly, for opposing with manly firmness his invasions on the rights of the people.

Tips for Writing in the Persuasive Style

Whether you’re writing a persuasive essay or longer opinion-based piece, or creating a speech, this type of writing requires a clear purpose and good organization. You can create this by keeping a few tips in mind:

Descriptive Writing: Form a Picture for the Reader

An example of descriptive text can help you understand how this type of writing works. Bringing in sensory details can create a much more vivid picture for the reader, as you can see in this example from Dinner at the Homesick Restaurant by Anne Tyler. In the space of two short paragraphs, she uses descriptive sensory details from four of the five senses:

Sarah continued to grip the dashboard. She had a broad, smooth face that gave an impression of calm, but if you looked closely you’d notice the tension at the corners of her eyes.

The car drew in around them like a room. Their breaths fogged the windows. Earlier the air conditioner had been running and now some artificial chill remained, quickly turning dank, carrying with it the smell of mildew. They shot through an underpass. The rain stopped completely for one blank, startling second. Sarah gave a little gasp of relief, but even before it was uttered, the hammering on the roof resumed. She turned and gazed back longingly at the underpass. Macon sped ahead, with his hands relaxed on the wheel.

Tips for Writing in the Descriptive Style

When you use this style of writing, you are creating an image for your reader. Don’t include details that distract the reader from the image you are creating. Keep these tips in mind:

Each Type of Writing Style Has a Purpose

Each of the four main types of writing styles have a different purpose. Keep that purpose in mind when you choose the style for your writing. Then, consider closely related elements like tone and mood to help convey your message to your reader.