Are you looking for some pirate puns that will have you and just about everyone else rolling with laughter? You're sure to have a knee-slapping, rip-roaring good time with these chuckle-worthy one-liners. They'll shiver the timbers of seafarers and landlubbers alike. 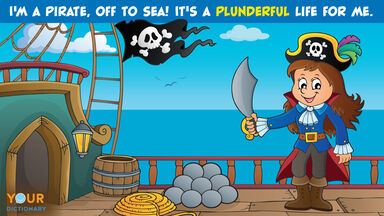 Funny Puns About Pirates and the Sea

Pirates and their crews spend most of their time at sea. The only thing they love more than sailing is finding treasure to keep!

More Pirate Puns for Everyone

You don't have to walk the plank to find funny pirate puns. Put on your pirate hat and relax on the shore. There's pirate lingo galore for you and your friends to explore.

Want a pun that's also a bit of a riddle? Check out these punny question-and-answer combinations! Just hope any pirate you say them to has a good sense of humor. Otherwise, matey, you just might be walking the plank.

Pirate puns are hilarious to read and even funnier to share, but they're not the only kind of pun; others aren't too rare. While you've got puns on the mind, poke around for a few others to find. Start with birthday puns to honor your friends. From there, explore even more pun examples so the fun never ends.