45 Math Puns That Are Better Than Pi Itself

Math may seem like a serious subject, but it's not just full of problems! Math puns rely on a reader's basic knowledge of mathematics and appreciation for wordplay. Keep reading for dozens of math puns that are perfect for Pi Day, Mole Day or any other day when you want to arithme-tickle your funny bone! 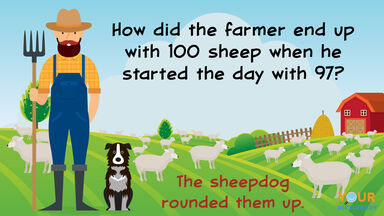 You may know that seven ate nine, but that's just because you need three squared meals a day! Check out these arithmetic puns that are perfect for basic math learners and elementary students alike.

Don't break your angle running toward these geometry puns! See which math jokes are perfect for your next class, and which ones might be too obtuse.

The humor level in these algebra and trigonometry puns isn't variable! Take a look at more math puns that aren't too derivative.

Getting a laugh out of logarithms is a nice way to appreciate math vocabulary. It's also great for breaking the ice in math class! For more school-specific puns, check out these science puns that will poke at your funny bone. From there, discover a few great book puns. You can also learn about the different kinds of puns with these explanations and examples of puns.