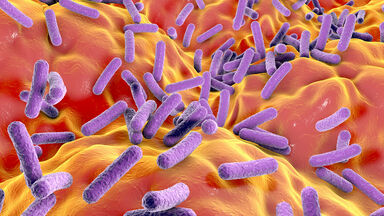 When you think of eubacteria, think of them as true bacteria. This is the category most bacteria are found in with the exception of archaebacteria.

When you hear bacteria, your brain might instantly go to those dangerous germs which make you sick. However, bacteria can be beneficial to our bodies too. In fact, there are 100 trillion good bacteria living in your body right now! Learn about different eubacteria examples.

Eubacteria are common bacteria. You’ve probably heard several of them like Streptococcus pneumoniae, which causes the pneumonia infection, or Lactobacillus, which is a good bacteria found in our gut.

When it comes to eubacteria, there are typically 5 different groups these bacteria fall into: proteobacteria, cyanobacteria, chlamydias and spirochetes, and gram-positive. Dive into eubacteria examples of each group.

If you’ve ever gotten flu-like symptoms from the lettuce on a ham sandwich or an undercooked burger, then you’ve met Escherichia coli, better known by its street name E. coli. This bacteria typically resides innocently within your digestive tract, but the wrong strain can wreak havoc on your digestive system.

E. coli is part of the largest group of bacteria called proteobacteria and includes multiple strains. For example, E.coli O157:H7 is one strain causing intestinal infections. Other strains of E. coli cause urinary tract infections. In fact, MedMD notes 75-95% of UTI infections are caused by E. coli.

You might not realize this, but some bacteria use photosynthesis. Cyanobacteria, known as blue-green algae, are photosynthetic bacteria seen in large colonies in water. So not only do they make their own food, but you can see these bacteria without a microscope if the colony is big enough.

Interestingly enough, cyanobacteria have two pretty amazing bragging rights. In addition to being the oldest fossils, Berkley University notes cyanobacteria contributed to the evolution of plants.

In humans, B. burgdorferi causes the illness Lyme disease. Typically, carried on ticks, B. burgdorferi doesn’t cause problems in most small animals. However, when it’s transferred to humans, it causes an infection with a host of symptoms like fever and rash.

Considered among the ‘bad bacteria’ Chlamydia trachomatis causes trachoma, a disease leading to blindness in 1.9 million people. This disease is spread through person to person contact and flies. Another strain of this bacteria is also known to cause the sexually transmitted disease chlamydia.

Last but certainly not least is good old Staphylococcus aureus, or staph. Staphylococcus aureus is a gram-positive bacteria, which means it retains the violet stain color in a gram stain test. Part of the family of Staphylococcaceae, staph is a common germ most people carry around in their nose and on their skin.

However, this eubacteria example can cause severe infections in the right conditions. It’s the culprit for the infection more commonly known as MRSA. In a healthcare setting, MRSA is a serious infection because it’s resistant to common antibiotics.