Flash fiction, also known as short-short stories, are stories no longer than 1,500 words in length. Indeed, they’re usually shorter than 1,000 words! They are designed to be read in four or five minutes. It’s not easy to get an entire story across with so few words, but if the author does it well, flash fiction can be a very rewarding experience for both writer and reader. 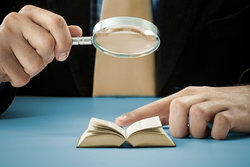 From Twitter #flashfiction to The New Yorker’s Flash Fiction series, you can find great examples of flash fiction everywhere. Here are some examples that are sure to inspire readers with only a few minutes on their hands.

Originally published in The Reporter in 1951, “The Pedestrian” is one of Ray Bradbury’s most famous works. Its 1,445-word format reveals a dreary reality where a man’s desire to escape the glow of a television is a highly suspicious activity.

To enter out into that silence that was the city at eight o'clock of a misty evening in November, to put your feet upon that buckling concrete walk, to step over grassy seams and make your way, hands in pockets, through the silences, that was what Mr. Leonard Mead most dearly loved to do. He would stand upon the corner of an intersection and peer down long moonlit avenues of sidewalk in four directions, deciding which way to go, but it really made no difference; he was alone in this world of A.D. 2053, or as good as alone, and with a final decision made, a path selected, he would stride off, sending patterns of frosty air before him like the smoke of a cigar.

Bradbury folds description, a futuristic setting, and characterization into his introductory paragraph, allowing the plot to unfold throughout the remainder of the story.

Virginia Woolf’s ability to quickly establish tone is evident in “A Haunted House.” Dialogue, sensory description, and action blend to create a poignant ghost story in only 710 words.

Whatever hour you woke there was a door shunting. From room to room they went, hand in hand, lifting here, opening there, making sure—a ghostly couple.

But it wasn’t that you woke us. Oh, no. “They’re looking for it; they’re drawing the curtain,” one might say, and so read on a page or two.

In three short paragraphs, Woolf shifts perspectives until the reader learns that the story features two ghosts, but is told from a first-person perspective. The ghosts’ search for treasure escalates until the story’s ending, which reveals what they seek—and will never have again.

Mark Twain experimented with format in his 810-word short story “A Telephonic Conversation.” He portrays a wife's half of a telephone conversation, overheard by her husband.

Yes? Why, how did that happen?

What did you say?

No! Oh no, I didn't mean that. I meant, put it in while it is still boiling--or just before it comes to a boil.

Twain stretches the conversation full of pauses and non sequiturs, allowing the reader to share his character’s annoyance with the uninteresting conversation. By making the story short and quick, he doesn’t risk tiring the reader.

Famous for her very short stories, Lydia Davis is the modern master of packing a lot of emotion and meaning into a few words. Her 423-word work, “Everyone Cried,” is an example of an effective flash fiction story.

Often, people cry when they are unhappy. This is natural. For a short time, when I was young, I worked in an office. Toward lunchtime, as the people in the office grew hungry and tired and irritable, they would begin to cry. My boss would give me a document to type, and I would push it away crossly. He would yell at me, “Type it!” I would yell back, “I won’t!” He himself would become petulant on the phone and slam it into its cradle. By the time he was ready to leave for lunch, tears of frustration would be running down his cheeks.

The introduction to Davis’s satire brings in the motif of crying that carries through the remaining five paragraphs. She uses the brevity of the piece to emphasize the importance of each emotional word, such as “unhappy,” “irritable,” “crossly,” “yell,” “slam,” and “frustration.”

Amelia knew from the beginning that the boy wasn’t hers. His nose was too pointed, his hair too thin; when he turned to the side he resembled a cliff swallow who’d lost his muddy nest. When he cried, Amelia’s ears rang. She could bring no comfort to his pointy shoulders, which shook against her chest during his night terrors.

Until one week, his nocturnal screams had given way to the soft sobs of a broken child. He hadn’t fought her as she held him, his tears sinking into Amelia’s cotton nightgown as she ran a hand up and down, up and down, up and down his back. The next night, Amelia’s embrace got him to sleep in just a few minutes. And the night after that, he’d slept all the way through.

The boy liked pancakes with grape jelly, Amelia learned, on the blue-and-yellow plastic plate. He liked cowboy pajamas and the glow-in-the-dark stars she’d painstakingly pasted on his ceiling just minutes before he’d stepped through her doorway, his possessions stuffed into a garbage bag at his feet. He liked these things, and soon, he loved them.

His laughter vibrated through the house like the satisfied lilt of a starling, declaring his place in this tree. It tickled the inside of Amelia’s ribcage and sent her into fits of tearful giggles. Bubble baths made him laugh. She could make him laugh. Everything made him laugh. She drank in the sound like it was sweet nectar.

On the last day, the same white car that had dropped him at her doorstep months ago rolled into Amelia’s driveway. An officious woman clutched the wheel with the same grip that Amelia found herself clutching the boy’s hand. It was time for reunification, which Amelia knew was the goal of the foster system. The boy was going back.

Amelia looked down and took in his features one last time. Soon he’d be back with his flock, his delicate features matching those around him, in the nest where he belonged. He was theirs.

But in those last seconds, as the car settled into a parked position and he squeezed her hand back, Amelia’s heart swelled. He may not have been hers, but in that moment, she knew she’d always be his.

Even Shorter Types of Flash Fiction

Believe it or not, stories can be a lot shorter than the maximum 1,500 words of flash fiction. Here are two types of short stories that take only a minute to read.

With Hemingway’s example, the story structure manages to establish character, conflict, and tone without direct exposition. Readers are left to their own tragic interpretation when it comes to the words that are not present.

Ready to get started on your own flash fiction story? Check out a list of creative writing exercises that are perfect for shorter stories. Just keep an eye on that word count!