While there are thousands of different religions in the world, the five oldest religions are generally described as the main world religions. These religions are Buddhism, Christianity, Hinduism, Islam, and Judaism. Discover some basic facts about these religions and get an overview of their core beliefs. 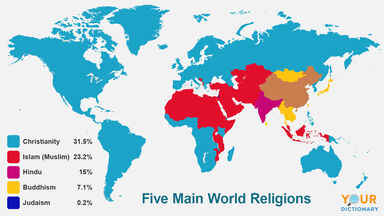 The followers of the five main religions make up a significant majority of the world’s population. The faiths considered to be the "big five" world religions are the oldest ones but not necessarily the ones with the most followers. They are generally considered to be the most widely recognized and influential religions. Close to three-quarters of the world's population practices one of the five main religions. Population percentages by religious affiliation break out as follows:

Christianity is the largest religion in the world, with more than 2 billion believers worldwide. The United States is home to the largest Christian population, but Christianity is widespread in many other places, including Canada, Mexico, the Philippines, several African nations, many European countries, and numerous Caribbean islands. There are many versions of Christianity, including Catholicism and various protestant denominations, each differing in many ways yet remaining similar in central teachings.

Islam is the second largest religion in the world, with an estimated 1.8 billion followers. Muslim is the term for people who follow the Islamic religion. This religion is believed to have begun in the 7th century B.C. in what is now Saudi Arabia. While Muslims live in many countries worldwide, they make up the majority of the population in several countries. There are seven countries where more than 90% of the population is Muslim (Algeria, Bangladesh, Egypt, Iran, Iraq, Turkey, and Pakistan). Some places follow Islamic (Sharia) law. Key facts about Islam include:

Hinduism began in India around 2300 B.C. and remains prevalent on that subcontinent. As of 2018, about 94% of those who follow the Hindu faith live in India. It is third largest religion in the world, with fewer followers than only Christianity and Islam. As with all religions, there are multiple sects of Hinduism, each with some variations in their practices. Core beliefs of Hinduism include:

Buddhism was founded in the fifth century B.C. by Siddhartha Gautama, who later became known as the Buddha. After giving up an extravagant life of excess, the man who came to be known as the Buddha discovered enlightenment through giving up his wealth and position to live a simple life as a monk. His efforts to teach others how to do the same became the foundation of Buddhism.

The vast majority of Buddhists live in the eastern and southeastern regions of Asia. There are numerous traditions within Buddhism, each with varying practices. Theism is not fundamental to Buddhism, though it is part of some Buddhist traditions. Fundamental beliefs of Buddhism include:

Judaism is the smallest of the top five religions. The worldwide population of Jewish people is estimated to be approximately 14 million. About 41% of the Jewish population lives in Israel and 41% lives in the United States, with the majority of the remainder concentrated in Europe and elsewhere in North America. There are multiple denominations of Judaism, including orthodox, conservative and reform. Core teachings and practices of the faith include:

While the five oldest religions, as detailed above, are generally considered to be the five main world religions, they are certainly not the only ones. Some newer religions are among the most popular faiths, defined as those religions that are most widely practiced worldwide.

These religions are among the oldest and most widely practiced, which is why they can be said to represent the five top religions in the world. There are multiple traditions within each one and many other religions exist. The United Religions Initiative (URI) is a great resource for learning more about other faiths. Now that you know some basic facts about five of the top religions in the world, it’s a good time to further explore the topic of religion. Start by learning how to identify differences between a cult and a religion.