5 Types of Fossils and How They Are Formed

Enter the wonderful world of fossils. Fossils give scientists a record to the past and allow the world to learn about past creatures, lives, and even civilizations. Discover the different types of fossils and how they are created. 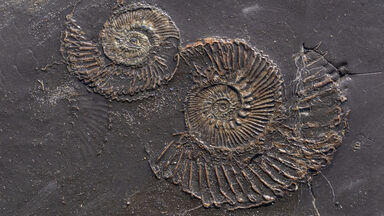 How Are Fossils Formed

In the hit movie, Jurassic Park, fictional scientists used fossils to create dinosaurs because fossils are remains of creatures from thousands to millions of years ago. How fossils form depends on the type of fossil it is. They form by being buried in mud or getting trapped in tree resin. Archaeologists dig up these fossils to help you learn about the past. Let’s look at each of the fossil types.

Have you ever seen a huge dinosaur recreated from bones? If so, you witnessed firsthand a body fossil. These fossils form from the remains of dead plants and animal bones, teeth, shells, woody trunks, and more.

Typically formed by permineralization, body fossils are created when minerals from water fill the cavities and crystalize, producing a hard rock. These rocks can be tiny, or in the case of dinosaurs, bigger than a human.

Fossils do this too. When a creature dies, under the right conditions, their body can leave a perfect mold in the rock or ground creating a fossil. For example, a shape as it breaks down might leave a perfect impression of its shape in the rock. This is a mold.

When sediment and debris fill the mold, it takes the shape of the mold and hardens. The sediment is now the cast of your fossil. Molds and casts are interesting because they tell us much about the shapes of structures.

Body fossils can’t tell us everything about a creature. It can tell us a lot, but trace fossils are where the real gold is. Trace fossils are the activity traces animals leave as clues about how they lived; for example, the scratches made on trees or the burrows they create. Plants leave traces of their leaves behind to give us ideas into their structure and form. Animals might leave nests, burrows, and scratches.

Coprolite can tell scientists all about animals’ diets. Why? Because coprolite is poop. It is the petrified feces left behind by animals. A unique kind of trace fossil, there are several factors that make coprolite unique. For instance, the shape of coprolite gives clues to the species’ intestinal tracts and digestion methods. Where it is found can tell researchers about the habitat of extinct animals. You wouldn’t think feces would be that important, but it can tell you a lot about an animal.

Amber fossils are unique. It's the body of an insect or frog, perfectly preserved in the resin of a tree. Amber fossils are opaque, making it so that you can see the creature inside. Amber fossils occur when the insect gets caught in the tree sap and then buried underground, creating a perfect example of a bug or insect from thousands of years ago.

Most fossils are petrified so the cellular spaces are filled with mineralization and crystallization. However, some situations leave us a perfectly preserved fossil. The bones, skin, and even internal organs can be left perfectly intact. A rare find, these fossils are wonders in the archaeological community. But, how do they form? Preserved remains usually are the result of a catastrophic event like getting caught in ice or volcanic ash. Some preserved mammoths have been found in peat bogs.

You can find fossils in all walks of life. In fact, in a thousand years, scientists will study the life of humans in 2020 using fossils. Since you know more about fossil types, keep your learning going by looking at bacteria. They have been around for a long time. If you want to take a break from learning, read some hilarious dinosaur puns.