The 7 Natural Wonders of the World: Earth's Most Awe-Inspiring Places 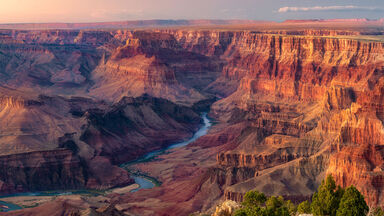 What Are the 7 Natural Wonders?

Although there are many lists of top natural wonders of the world, the generally accepted list was compiled in 1997 by Seven Natural Wonders and CNN. The list comprises:

1. Aurora Borealis in the Arctic Circle

Aurora borealis, commonly known as the Northern Lights, is a spectacular natural light show in the sky. These lights at the magnetic North Pole are caused by the collision of solar particles with gaseous particles in Earth’s atmosphere. The term “Aurora borealis” was coined by astronomer Galileo Galilei in 1691, but sightings of the Northern Lights date as far back as 30,000 years ago.

The Northern lights can be seen by dozens of countries on a clear night, but some of the best places to view them are Alaska, Siberia, Norway, Canada, Greenland, and Iceland. The Southern Hemisphere also has polar lights (Aurora australis), but the ocean makes them harder to see.

The Grand Canyon in Arizona was carved by the Colorado River over six million years. Its deepest point is just over one mile (6,000 feet), making the canyon one of the deepest canyons in the world. But the Grand Canyon isn’t just deep — its massive 277-mile span makes it even bigger than the state of Rhode Island!

Thanks to the conservation efforts of President Theodore Roosevelt in the early 20th century, the Grand Canyon is a protected national monument. Nearly six million people visit Grand Canyon National park every year, making it one of the most popular natural tourist destinations in North America.

Some areas of the reef are millions of years old and house prehistoric creatures, such as the nautilus. However, due to climate change and pollution, the Great Barrier Reef corals are dying and bleaching at a rapid rate, putting the life of the reef at risk.

It may surprise some travelers that the Harbor of Rio de Janeiro, which is Portuguese for “River of the First of January” (named for explorers’ January 1, 1502 arrival date), doesn’t border a river at all. It’s the world’s largest natural bay alongside the Atlantic Ocean. Surrounded by granite mountains, the Harbor of Rio de Janeiro extends 20 miles inland and is 17 miles long.

Also known as Guanabara Bay (“the bay of the sea” in the indigenous Tupi language), the harbor is surrounded by the city of Rio de Janeiro in Brazil. It’s also visible from one of the seven modern wonders of the world: Brazil’s Christ the Redeemer statue.

5. Mount Everest in the Himalayas, Asia

Mount Everest has become a metaphor for any obstacle that seems insurmountable. But the real Mount Everest is no metaphor — it’s a mountain in the Himalayan Mountain Range between Tibet and Nepal. With an elevation of over 29,039 feet, Mount Everest (Chomolungma in Tibetan, Sagarmatha in Sanskrit) is the tallest place on Earth.

The first people to climb Mount Everest were Sir Edmund Hillary and Tenzing Norgay in 1953. Since then, 6,000 more people have successfully summited Mount Everest, and over 300 people have died trying to reach the top. The ascent is so dangerous that the last section of the mountain is known as “the death zone,” where the air only contains 21% oxygen.

The Paricutín volcano or (Volcán de Parícutin) is one of the world’s youngest volcanoes, which is one of the reasons why it’s such an impressive landform. Located in central Mexico within the Ring of Fire, Paricutín suddenly appeared and erupted in a farmer’s cornfield in 1943 — and didn’t stop until 1952. The volcano grew 1,300 feet in the first year, and today it stands over 9,000 feet tall.

Paricutín is considered a natural wonder due to its short lifespan and rapid growth. Volcanologists were able to witness its birth, life and death within the course of a decade, as opposed to volcanoes that became active thousands of years ago.

At 354 feet high, Victoria Falls between Zambia and Zimbabwe is not as tall as Angel Falls in Venezuela (3,212 feet). And with a width of 5,604 feet, they’re not as wide as the Khone Phapheng Falls in Laos (35,376 feet). But the Victoria Falls are considered the world’s largest sheet of falling water with 50 million liters falling per minute, making the waterfall one of the seven natural wonders of the world.

Originally known as Mosi-oa-Tunya (“the smoke which thunders” in the native Lozi language), Victoria Falls was named after British monarch Queen Victoria by European explorer David Livingstone in 1855. Today, the falls are a major tourist attraction in Africa. When the water levels change in September, daredevils can swim in a natural pool called Devil’s Pool. Additionally, the Victoria Falls are near the Victoria Falls Rainforest and create a nighttime rainbow, known as the moon rainbow.

Learn More About This Wonderful World

The seven wonders of the natural world range from plummeting canyons to towering mountain ranges. But even if you’re not scuba diving in the Great Barrier Reef or gazing up at the Aurora borealis, you’ve seen the natural beauty of our planet at work. Learn more about Earth’s major and minor landforms and where they can be found in the world.