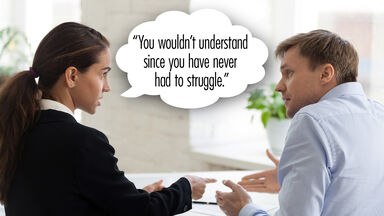 This type of personal attack fallacy is often witnessed in debates in courtrooms and politics. Often, the attack is based on a person's social, political, or religious views. Either way, ad hominem fallacy attacks undermine the case and are to be avoided at all costs. You'll see why as we explore ad hominem examples below.

The Function of Ad Hominem Arguments

Sometimes, people utilize ad hominem fallacy because they want to appeal to people's emotions. (Raise your hand if you've ever jumped to a conclusion based on emotion, rather than reason.) But, that's precisely why these kinds of arguments are often made of straw rather than of steel.

As soon as you spot someone coming after you with an ad hominem argument, you can counter their attack in two moves.

Make sure you never find yourself on the wrong side of an ad hominem argument with a quick review of the concept in this video.

Let's review several ad hominem examples. Unfortunately, they're prevalent in the courtroom and in politics, so we'll begin there. To no surprise, ad hominem fallacy arguments also occur in any sort of daily interaction, so we'll review a few more everyday examples, too.

The more you read about examples of ad hominem arguments, the more you'll be able to spot them and, if need be, defend yourself against such claims.

It won't surprise you to learn ad hominem attacks are attempted in the court of law, where jury members' emotions are played upon on a regular basis.

Have you ever watched a presidential debate? Boy, can they get ugly. Some politicians have even been known to resort to name-calling. Things certainly get sticky in the political arena; here are a few examples to that effect.

Whether it’s an opinion piece or lively on-air discussion, words can easily get personal. Explore some different examples that attack religion, sexual orientation, and even socioeconomic status.

A simple conversation can suddenly take a left turn into ad hominem territory. Something very innocent can inadvertently become a personal attack on someone else. Let's take a look at a few more examples so you can keep your ad hominem detective skills on point.

It's worth mentioning that, in some cases, a personal attack can be relevant to the discussion at hand. Perhaps you're illustrating a long-standing character defect that has influenced another person's bad behavior.

The trouble is these arguments are not always rooted in facts and hard data, and they often take a wrong turn into information that isn't directly related to the discussion at hand. So, try to avoid them and, by all means, protect yourself against such attacks.

If you ever find yourself in a position where you need to battle back an ad hominem attack, see if you can incorporate some positive correlation examples to turn the tide.