Often writers and artists want to teach moral lessons or critique society in their works. This can be hard to do, however, without getting heavy-handed or preachy. Allegory is the ideal solution to this dilemma. Allegory allows creators to talk about something without directly talking about it or to add layers and hidden messages to their work. 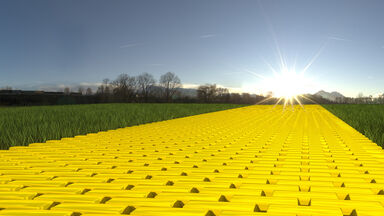 What Is an Allegory?

An allegory is a story, poem or work of art that has a hidden meaning or message, usually a moral. Allegories use characters and events to convey a meaning rather than stating the message. Allegories can also employ other rhetorical devices such as irony, personification, symbolism, and metaphor to convey their hidden meaning.

Examples of Allegory in Literature

One of the beauties of allegory is that writers can use it to imply their intended message rather than making blatant moral statements. They can express this through moving scenes, witty dialogue, inventive characters, or vivid imagery.

Animal Farm by George Orwell is a political allegory pertaining to the Russian Revolution of 1917 and the rise of communism. It outlines the different classes in society through the depiction of animals. The animals all seek to overthrow their human owner, Mr. Jones. He represents the last Russian tsar, Nicholas II, whom the people rose up against and the Bolsheviks ultimately killed along with his family in the Russian Revolution of 1917.

In Animal Farm, the pigs are an allegory for the Bolsheviks and the main farm animals represent prominent figures of the Russian Revolution. The boar, Napoleon, represents Joseph Stalin, Old Major is a mix of Karl Marx and Vladimir Lenin, and Snowball is Leon Trotsky.

Beatrice and Virgil by Yann Martel

Beatrice and Virgil by Yann Martel is an allegory for the monumental pain and suffering experienced by victims of the Holocaust. The main character, Henry, is a novelist who pitches a book about the Holocaust, but it is rejected by his publisher. He then receives a play script in the mail. Henry finds that it came from a taxidermist, also named Henry, who introduces him to two taxidermy animals — Beatrice, a donkey, and Virgil, a monkey.

Eventually, Henry realizes that the taxidermist "is using the Holocaust to speak of the extermination of animal life ... He was seeing the tragic fate of animals through the tragic fate of Jews. The Holocaust as allegory.” Beatrice and Virgil are an allegory for the victims of the Holocaust, and the taxidermist represents the Nazi regime. Yann Martel also uses riddles, literary allusions and other rhetorical devices to portray Henry’s confrontation with evil.

The Faerie Queene by Edmund Spenser

The Faerie Queene by Edmund Spenser is a moral allegory where each character represents a virtue or a vice. Specifically, the knight Redcrosse represents Holiness and his love the Lady Una stands for goodness and the one true faith. His quest involves seeking Lady Una and by extension seeking Truth. When Redcrosse (Holiness) is Separated from Una (Truth) he is tempted by another woman called Duessa (Falsehood). Ultimately, he must resist Falsehood and defeat Evil (the dragon who imprisons them). The titular Faerie Queen, also known as Glorianna, represents Queen Elizabeth I who was queen when Spenser wrote his poetry. Spenser presented the poem to Queen Elizabeth in order to gain favor in her court.

The Lion, the Witch and the Wardrobe by C.S. Lewis

The Lion, the Witch and the Wardrobe by C.S. Lewis is a religious allegory. The story depicts four siblings who go through a wardrobe to a magical land called Narnia where it is always winter and never Christmas due to a spell cast by the evil White Witch. They encounter the witch as well as the talking lion, Aslan, who represents Christ or God and is the only one who can deliver the world. One of the siblings, Edmund, betrays his siblings and Aslan after being tempted by the witch. He represents Judas the betrayer. Like Jesus, Aslan sacrifices himself for the sins of Edmund, and is resurrected from the dead.

The Lord of the Flies by William Golding

The Lord of the Flies by William Golding presents allegories about society, morality, religion, and more. The primary theme is the conflict between the impulse toward civilization and the impulse toward chaos and savagery. Each of the main characters represents an aspect of this spectrum. For example, Ralph represents civilized society while Jack embodies savagery and lust for power. Additionally, the island represents the whole world, the conch stands for law and order, and the fire represents hope and destruction.

Examples of Allegory in Movies

Beyond dramatic sequences and death-defying stunts, movies can depict allegories in numerous ways.

The classic film adaptation of The Wizard of Oz is full of symbolism, but it is also a surprising allegory for the politics of the day. The author of the books, L. Frank Baum, even added direct references to political figures of the day in a 1901 stage adaptation. The heroine, Dorothy, represents the American middle class, while her friends embody different aspects of America’s past, present and future. The Scarecrow represents the agrarian past, which is seen as lacking thought, while the Tin Man (who requires oil) represents the technological future that lacks heart. The Lion’s cowardice could be the fear to make decisions, but the lion himself was explicitly a stand-in for the politician William Jennings Bryan.

Dorothy’s iconic ruby slippers were in fact silver in Baum’s novels. The slippers and the yellow brick road symbolize the debate of the day whether the U.S. should have a gold-and-silver or gold-only currency standard. The Emerald City is, as the name suggests, green like cash, and Oz takes its name from the abbreviation of ounces in which gold and silver are measured.

Wall-E is a moral-based allegory about protecting the Earth. Although the director of the film Andrew Stanton denied that it was an allegory, there are many things that can be interpreted as allegory, intentional or not. Set in the future, the movie revolves around two robots named Wall-E and Eve, who are trying to save an abandoned Earth. In the end, the humans plant a green stem and water it, symbolizing their commitment to save the planet. Stanton adds another layer to this with his claim:

“I just went with things that I felt were logical for a possible future and supported the point of my story, which was the premise that irrational love defeats life’s programming, and that the most robotic beings I’ve met are us.”

Based on this, Wall-E can also be read as a critique of modernity making people more robotic by showing two robots — one of whom shares a name with the first woman in Judeo-Christian texts — falling in love and overcoming adversity.

Zootopia is a film steeped in allegories pertaining to war, tolerance and equality. When a little bunny, Judy Hops, fulfills her lifelong dream to become a police officer, she is instead given parking duty by the chief because he doesn’t think she can handle anything else. Additionally, the residents of Zootopia live in fear of “predators,” some of whom are even removed from their jobs. This is an allegory for workplace discrimination, racism and racial profiling. Interestingly, the name "Zootopia" is a direct nod to the concept of Utopia — an idyllic society that is equally beneficial for all. This adds an element of irony because Zootopia is not ideal for all.

Examples of Allegory in Art

Visual art is the perfect way to depict a message without using a single word.

Albrecht Dürer's “Melencolia I” depicts a winged female figure who personifies melancholia or sadness. The engraving is a blatant allegory for melancholy and it portrays this through symbolism. It is littered with objects related to geometry including an hourglass, a scale, a claw hammer, a saw, and a “magic square” above the melancholic figure. Dürer also uses other symbols like a rainbow, a bell, a purse and keys, a comet or planet, and an angel or stone figure mirroring the main figure's pose. Some of these symbols indicate that the figure may be artistic but lack motivation due to her depression. The hourglass and empty scale convey the woman's sad emotional state and time running out.

An Allegory With Venus and Cupid by Bronzino

Bronzino's “An Allegory with Venus and Cupid” illustrates the time and folly that come with love. In Greco-Roman mythology, Venus was the goddess of love and Cupid was her son who would pierce people with arrows which caused them to fall in love. The figure Folly personifies foolishness while Time is represented as an old man reaching over the others. The figure of the old woman in the shadows is more mysterious but has been said to represent Jealousy. It has also been theorized that the painting is an allegory for the ravaging effects of syphilis.

Allegory of Prudence by Titian

Titian's “Allegory of Prudence” depicts three human heads and three animal heads, each facing in different directions. One interpretation is that each head represents the past, present and future as the three men are young, middle-aged and elderly, respectively. The animals — a wolf, lion and dog — may be a three-headed beast meant to represent the Hellenistic Egyptian god Serapis.

Above the image is barely legible Latin text that translates as "from the experience of the past, the present acts prudently, lest it spoil future actions." This suggests that the painting is a depiction of the stages of man. Another interpretation harkens back to the title: The three faces represent the importance of prudence and looking back, forward and directly at what is in front of you.

Allegory is one of the best ways to convey a message in any medium. Explore other tools you can use to send a message to your audience.