Alliteration happens when words that start with the same sound (not just the same letter) are used repeatedly in a phrase or sentence. The sound is a consonant sound, and the words don't have to be right next to one another. Alliteration can make ordinary sentences sound funny, so get ready for giggles with these alliteration examples for kids! 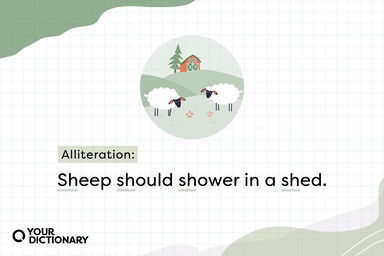 When you repeat the first consonant sound more than once in a sentence, it’s alliteration. It's different from consonance or assonance, which also repeat sounds but do it in other parts of the sentence. Most alliteration comes from repeated first letters (such as “calling cats”), but it also works with repeated sounds and different letters (such as “calling kittens”).

More examples of alliterative sentences include:

Alliteration in Rhymes and Stories

Reading alliteration in nursery rhymes and stories is fun and entertaining for children. These phrases can help kids develop memory skills and phonics awareness.

You can find alliteration in the following lines from children's stories:

One of the fun features of alliteration is when it becomes a tongue twister. Try saying these alliterative tongue-twister examples quickly!

Want to hang a poster about alliteration in your classroom? Download and print the image below for a handy reference guide to alliteration examples for kids.

Have Fun with Language

Alliteration is an exciting way to illustrate major points and make names memorable. Teaching kids to incorporate this into their creative writing is a fabulous way to spark a lifelong love for the written word. When you're ready, continue the journey with more alliteration examples. And when it's time to challenge yourself, sprinkle in a few examples of alliteration poems.