Alliteration is found in a lot of texts, and William Shakespeare was a master. Explore alliteration in Romeo and Juliet to see how words weave into art. 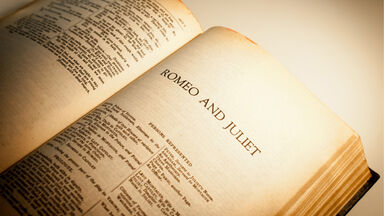 Before jumping into alliteration in Romeo and Juliet examples, it can be helpful to look at what alliteration is. Alliteration is defined as the repetition of the first consonant sound or sounds in two or more words that follow each other in succession. These words may be immediately adjacent or separated by a few words. A simple example is:

Betty had a baby boy.

Alliteration in Prose and Poetry

Alliteration is often found in literature and poetry because it can frame a scene beautifully. It jumps off the page and into the reader's mind, but it can also emphasize a theme. When it's time to bring an idea home, alliteration is a great way to do it. Using the works of William Shakespeare as a source to understand this literary tool is one of the finest places to start. Sit down and put your seat belt on; you're about to take a trip through examples of alliteration in Romeo and Juliet.

Alliteration in Romeo and Juliet

In each of the quotes, know that, if Shakespeare is employing this tool, it's because he had something to say. Ready to see how a master of figurative language does it?

This is an example of alliteration with the letters "f" and "l." The line starts the second quatrain of the play's prologue (which is also a sonnet) and is used to strike a notable change in subject from the feud between the two families to the fatal alliance between their children.

"From forth the fatal loins of these two foes
A pair of star-cross'd lovers take their life;"

The alliteration of the "d" sound is being used to emphasize the irony that Romeo once said he'd die for his former love, Rosaline. Once she's old news, isn't it ironic that he does, in fact, go on to die for Juliet?

These four repetitions of "d" are meant to emphasize the strength of the early morning light. (Light is a major motif within the play.)

"The day to cheer and night's dank dew to dry,"

The alliteration of the "s" illustrates the power of a single flower. It can stop the senses and even the heart.

"Being tasted, slays all senses with the heart."

The repeated "w" and "th" sounds add drama to the Friar's lament about how quickly Romeo has switched affections from Rosaline to Juliet.

Juliet also has her time to shine when it comes to alliteration. The repetition of "f" is used to illustrate Juliet's desperate desire for Romeo to come to her. It also demonstrates that alliteration isn't just a repeated letter but sound with the inclusion of "Phoebus." This theme continues into the third line. Shakespeare is relying heavily on alliteration at this moment to illustrate Juliet's desperation for the sun to set.

"Gallop apace, you fiery-footed steeds,
Towards Phoebus' lodging: such a wagoner
As Phaethon would whip you to the west,"

Juliet continues her use of alliteration in Act 4. The "f" sound is used three times to hype up the anticipation of Juliet's farewell to Lady Capulet and the Nurse.

"I have a faint cold fear thrills through my veins,
That almost freezes up the heat of life:"

Alliteration is found in the "g" and "d" sounds to accentuate the power of impending depression.

"When griping grief the heart doth wound,
And doleful dumps the mind oppress,"

Alliteration is just one type of literary tool. Both assonance and consonance are related devices used by Shakespeare, as well many other poets and authors.

Alliteration and other literary tools are important to consider when you want to emphasize certain words, add to the mood of the scene or accentuate a motif. Although Shakespeare was inarguably the master of alliteration (among other types of figurative language), he wasn't the only one. Continue to savor this tasty alliterative treat with a few examples of alliteration in poems.