Alliteration Examples: Meaning and Everyday Use

Alliteration is a literary device in which a series of words begin with the same consonant sound. It's used to emphasize something important that a writer or speaker would like to express. Take a look at these alliteration examples, and explore how they affect the sentence. 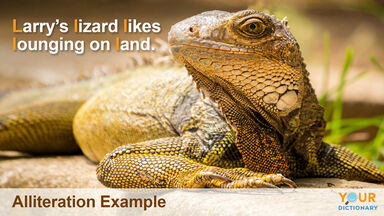 How to Identify Alliteration

The best way to spot alliteration in a sentence is to sound out the sentence, looking for the words with identical beginning consonant sounds. Alliterative words don't have to start with the same letter, just the same initial sound. They can also be interrupted by small, non-alliterative words.

For example, "James and the Giant Peach" is still an example of alliteration, even though it uses both "j" and "g" and includes the words "and" and "the." Read through these sentences to help you identify alliteration.

Some of these sentences might sound like tongue twisters to you. In fact, tongue twisters often use alliteration to try and trip readers up (such as "Peter Piper picked a peck of pickled peppers").

Companies use the alliterative effect all the time. Think of all of the famous and well-known brands and companies that have used alliteration in their names.

The major reason companies use alliteration is to ensure their brand name is memorable. The human brain likes the repetition of alliteration, making it easier to store in your memory.

There are probably some fictional characters or public figures that stand out in your head as a result of the alliterative effect of their name.

Examples of famous alliterative names include:

Alliteration in Phrases and Quotes

Many well-known phrases, quotes and sayings also make use of alliteration. It's quite common in conversational idioms that you hear every day.

Like alliterative company names and proper names, alliteration in common sayings helps to make them memorable. "Right as rain" is much more fun to say than "totally right!"

Alliteration is a commonly used stylistic tool that adds emphasis and interest to a sentence and can help you remember names and phrases. Alliteration in poetry is very effective, as it frames a memorable picture. Clear up the difference in your poetic sound devices by learning the difference between alliteration vs. assonance vs. consonance.