Alliteration vs. Assonance vs. Consonance in Poetry

When you see repeated letters or syllables in a poem, you may think it’s alliteration. But it may actually be assonance or another form of consonance instead. Keep reading to learn the difference between these three devices, as well as how poets use each for auditory effect. 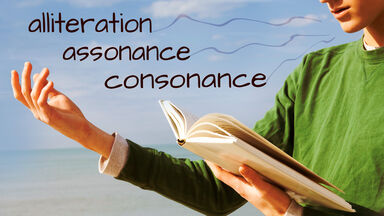 Alliteration, assonance, and consonance are all poetic sound devices. They use repetition to create sounds and set the mood within a poem. These sounds can be pleasing if the poet wants the reader to feel relaxed, abrasive if the reader should feel tense, or any other mood.

The difference between alliteration vs. assonance vs. consonance isn’t as tricky as it seems. Here are the definitions for each sound device:

You may notice that the definitions of alliteration and consonance are similar. Keep in mind that that alliteration involves the first consonant sound in multiple words, while consonance can appear anywhere in the word (typically at the end). The sound devices occur in quick succession, usually within several words in a row or in a line.

Alliteration is the easiest sound device to identify in a poem. Because it involves the first letter or blended sound in two or more words, readers can track this repetition quite easily. Some basic examples of alliteration would include:

Here is an example of alliteration used for poetic effect. Emily Dickinson’s poem “Fame is a fickle food” uses alliteration not only in the title, but also throughout the poem:

Fame is a fickle food

Upon a shifting plate

Whose table once a

The second time is set.

Whose crumbs the crows inspect

And with ironic caw

Flap past it to the

Men eat of it and die.

(“Fame is a fickle food,” Dickinson)

Notice how Dickinson pairs specific words with alliteration: fame/fickle, second/set, crumbs/crows/caw, flap/farmer. But in the last line, which brings man’s death, the alliterative structure breaks down. You can read more examples of alliteration in poetry to help you identify the ways poets use the device for different effects.

Assonance, also known as “vowel rhyme,” can affect a poem’s mood as alliteration does. The vowels typically appear in the middle of the word. For example:

You may observe that the vowels are not identical from word to word. In fact, only the vowel sound is required to match in assonance, not the vowel itself. That’s how a pattern like “falls across” is still an example of assonance.

Read the first stanza of “In a Garden” by Amy Lowell for an example of calming assonance:

Gushing from the mouths of stone men

To spread at ease under the sky

Where iris dabble their feet

And rustle to a passing wind,

The water fills the garden with its rushing,

In the midst of the quiet of close-clipped lawns.

These repeated sounds represent the different noises one might hear in a garden. Check out additional assonance poetry examples to see how many ways vowels can change the sound of a poem.

When combined with assonance at the end of the word, consonance results in middle or end rhyme in a poem. Here is an example of consonance in “Mother to Son” by Langston Hughes:

Life for me ain’t been no crystal stair.

It’s had tacks in it,

And boards torn up,

And places with no carpet on the floor—

But all the time

I’se been a-climbin’ on,

And sometimes goin’ in the dark

Where there ain’t been no light.

So boy, don’t you turn back.

Don’t you set down on the steps

’Cause you finds it’s kinder hard.

And life for me ain’t been no crystal stair.

The poem takes the reader up and down a stair of sounds. The repeated -ll and st- sounds in the beginning are repeated in the end of the poem, with hopeful -in sounds sprinkled in the middle and end. Not only does the poem make use of consonance, it uses dialect to establish the poem’s mood.

Alliteration, assonance, and consonance are vivid ways to help readers experience poetry in an auditory way. Using these three devices makes a poem more resonant and enjoyable. If you’d like to learn about more poetic sound devices, check out an article about onomatopoeia in poetry.