The United States of America was founded on the principles of independence and individual liberty. Early patriots defended those tenets during the lead-up and campaigns of the American Revolution (1775-1783), and modern Americans strive to uphold the examples set for them so many centuries ago. Take a look at an American Revolution timeline to see the important events of the Revolutionary War, as well as the events that led up to and followed the war. 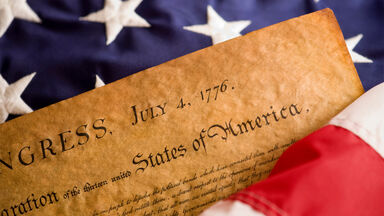 Events Leading to the Revolutionary War

The American Revolution can be defined as a boiling point after many years of tension between the American colonists and their British authorities. Several important moments that led up to the Revolutionary War include:

The Fight for Independence

Revolution was already on the horizon by the time the first shot was fired. Take a look at a Revolutionary War timeline that details the first pivotal events and battles of the American Revolution.

In April 1775, Paul Revere used secret American intelligence to warn colonists about an impending British attack at Concord. The "shot heard round the world" (coined by Ralph Waldo Emerson in "Concord Hymn") occurred on April 19, 1775, during a skirmish at Lexington that left eight Americans dead. It led to the battles of Lexington and Concord, which marked the official beginning of the Revolution with an American victory.

The Second Continental Congress unanimously appointed George Washington, a hero of the French and Indian War, as General and Commander-in-Chief of the Continental Army on June 14, 1775. Washington oversaw the war effort from his vantage point in New England, primarily Boston and New York, eventually setting up headquarters at West Point, Virginia.

Over five thousand troops fought at Bunker Hill, where the British managed to hold their territory against the American soldiers. The battle took place on June 17, 1775, and although it was a British tactical victory, it emboldened American forces. Only 450 Americans died during the fight, compared to 1,054 British soldiers.

The Americans and British engaged in many large battles and smaller skirmishes as part of several tactical campaigns. The Boston Campaign took place in New England with the battles of Lexington, Concord and Bunker Hill. However, American revolutionaries also engaged in Canada, Saratoga and other areas of the North American continent.

December 1775: The Attempted Invasion of Quebec

The Canada Campaign consisted of a series of battles intended to take control of Quebec, a British province, and to enlist Canadian support for the revolution. Troops under Colonel Benedict Arnold and General Richard Montgomery attempted to invade the province on December 31, 1775 but were eventually forced to retreat after Montgomery's death and the arrival of an additional British fleet. Arnold would later go on to become America's most famous traitor after agreeing to surrender the Hudson River fort for a position in the British army.

July 1776: The Declaration of Independence

Congress appointed a committee to draft a declaration that would separate America from Britain, and on July 4, 1776, they adopted Thomas Jefferson's draft of the Declaration of Independence. It was read publically in Philadelphia on July 8 and read aloud to the troops (by Washington's order) on July 9.

Most historians consider the New York and New Jersey Campaign of 1776 to be the American low point during the Revolutionary War. A lack of intelligence and strong leadership led to a tumultuous series of battles for New England, including British victories in the Battle of Long Island (August 27-29), the Battle of Pell's Point (October 18) and the Battle of White Plains (October 28). Washington's army finally defeated British troops in the Battle of Trenton (December 26) after crossing the Delaware River into New Jersey.

September-October 1777: The Battles of Saratoga

American morale was high after the victory at Trenton and remained high as they defended the valuable Hudson River valley from British forces in 1777. The First Battle of Saratoga (also known as the Battle of Freeman's Farm) took place on September 19, 1777, and ended with Benedict Arnold's victory over British General John Burgoyne. The Second Battle of Saratoga (October 7, 1777) was also an American victory and marked the beginning of the end of British power in North America.

September-December 1777: The Battles of Brandywine, Germantown and White Marsh

While success in Saratoga was heartening to the patriots, the Americans were struggling in the Pennsylvania Campaign. George Washington's troops had suffered defeat against the British Army in the Battle of Brandywine (September 11, 1777) and the Battle of Germantown (October 4, 1777). Their final engagement of the year with British forces, the December 4th Battle of White Marsh, ended without a decisive result, leaving Washington and his struggling army to winter in Valley Forge, Pennsylvania.

The End of the Revolution

The power struggle between America and Britain was at a precarious balance at the beginning of 1778. However, even though the war would last three more years, the balance had already begun to shift in America's favor.

November 1777: The Articles of Confederation

The Second Continental Congress approved the highly debated Articles of Confederation on November 15, 1777. The Articles served as a preliminary Constitution for the colonies and served to protect domestic freedoms and regulate various diplomatic efforts — which would prove quite necessary in the years to follow.

France had just lost most of its North American territory to Britain after the Seven Years' War. By aiding American revolutionaries, France had an opportunity to stop Britain from accumulating even more power. Benjamin Franklin and the Marquis de Lafayette were among the individuals who secured France's financial and military help on February 6, 1778, with the Treaty of Alliance. France officially declared war against Britain four months later, as did their ally, Spain.

As part of Britain's Southern Strategy, the Capture of Savannah took place on December 29, 1778. Massive British invasion forces stormed the city against the American militia, successfully taking it under British control. American and French troops attempted to reclaim Savannah in September 1779 during the Siege of Savannah, one of the bloodiest battles of the Revolutionary War, but failed to take it back.

October 1781: The Battle of Yorktown

Although the British Army had outnumbered the Americans in previous years, their focus was spread all over the continent in 1781, thanks to French intervention. Led by Lieutenant Colonel Alexander Hamilton, nearly 20,000 American and French troops launched surprise attacks and endless bombardment against a dwindling British Army at Yorktown, Virginia. British General Charles Cornwallis eventually surrendered to the Americans on October 19, 1781, effectively ending the Revolutionary War. The official end of the war would come with the Treaty of Paris on September 3, 1783.

If you'd like to see a timeline of the American Revolution that covers these events at a glance, check out the PDF below. It's perfect for easy reference.

The Enduring Effects of Independence

Early Americans' relentless pursuit of freedom remains a steadfast quality of the country today. However, as the young country quickly learned, democracy is only as strong as the people who constantly defend it. Check out a timeline of American wars and how they contributed to the nation's modern state of independence. Then dive into another historic American war, the U.S. Civil War. From there, explore how the U.S. expanded as a country with a westward expansion timeline.