The United States has been involved in many wars since the nation was first established. Review this American wars timeline to get a sense of the major wars the country has been embroiled in. 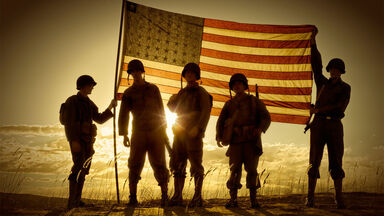 The United States was officially established with the original colonies' fight to win independence from Britain and the gaining of territories from Spain. Ultimately, the U.S. was involved in five major wars throughout the 18th and 19th centuries.

Sometimes referred to as the Revolutionary War or the War of American Independence, the struggle most commonly known as the American Revolution led to the establishment of the United States of America as a country. Before this, America was ruled by Great Britain and paid taxes to the British government. As a result, Britain sent troops to the American colonies, and the war began in earnest in 1775.

The United States declared its independence from Britain in 1776. Ultimately, Britain surrendered at the Battle of Yorktown in 1781. The war officially ended with the signing of the Treaty of Paris in 1783 when Britain officially recognized the independence of the 13 American colonies. These colonies were declared independent states and, over time, the U.S. has expanded to 50 states.

The War of 1812, sometimes referred to as the Second War of American Independence, was also fought against Great Britain. This war came about because Great Britain was interfering with the U.S.’s ability to trade with France, the impressment of thousands of Americans into the British Royal Navy, and the British support of Native American tribes along the Great Lakes.

The U.S. declared war on Great Britain, which had already been at war with France since 1793. The war was primarily fought in Canada, which was then under British rule. American political leaders believed that winning a war against Great Britain could lead to the U.S. being able to annex Canada. The war went on for two years and ultimately ended in a draw. The nations signed the Treaty of Ghent in 1814 and ratified it in 1815, signifying the end of the conflict.

In 1845, the Republic of Texas became part of the U.S. Texas had previously been part of Mexico before becoming the Republic of Texas in 1836. However, the Mexican government refused to accept the annexation of Texas and launched an attack against U.S. troops. As a result, the U.S. declared war on Mexico. The U.S. prevailed in the Mexican-American War, which ended with the signing of the Treaty of Guadalupe Hidalgo in 1848.

As a result of this war, the U.S. gained control of areas that later became the states of California, Nevada and Utah. The U.S. also gained the land that became part of several other western states, including Arizona, Colorado, New Mexico, and Wyoming.

The Civil War was fought between the southern states and the northern states of the U.S. This war occurred because the southern states disagreed with the plans of President Abraham Lincoln and the federal government to halt the expansion of slavery. These states seceded from the Union and became the Confederacy.

The war was fought between Confederate states and Union states, with the Union ultimately prevailing. Confederate forces surrendered after spending four years fighting the most deadly war the nation had ever experienced to that point. The practice of slavery was abolished following the Civil War.

In the late 19th century, Cuba was a Spanish territory and desired independence from Spain. Conflict raged between Spain and Cuba from 1895-1898, which led to economic and political instability in the region. Since the U.S. traded with Cuba, they expressed interest in getting involved in the conflict, which angered the Spanish. When a U.S. battleship mysteriously exploded and sank in Havana harbor, the U.S. decided to intervene by offering Spain an ultimatum for Cuba’s independence. In response, Spain severed diplomatic relations and declared war on the U.S.

The U.S. prevailed in the Spanish-American War and effectively put an end to the influence of the Spanish colonial rule that had affected the Americas for centuries. The war ended with the signing of the Treaty of Paris of 1898. As a result of this war, Spain surrendered Guam, the Philippines and Puerto Rico to the United States, and the U.S. annexed Hawaii.

World War I, also known as The Great War, was one of the biggest global conflicts in history. The war began in Europe in 1914, but the U.S. didn't formally enter the war until 1917 after President Woodrow Wilson urged Congress to declare war on Germany. This was due in part to Germany's failure to abide by its agreement to stop its submarine warfare against the U.S. in the Mediterranean and the North Atlantic. Germany had also been trying to convince Mexico to join them in solidarity against the United States.

World War II started in 1939 after Germany invaded Poland on September 1. However, the U.S. didn't officially get involved until Japanese forces attacked Pearl Harbor. Congress did not delay, declaring war on Japan the day after Pearl Harbor was bombed, December 8, 1941. Just a few days after the U.S. declaration of war on Japan, Germany declared war on the U.S.

The U.S. became part of the Allied Powers, which also included Great Britain and the Soviet Union, who had already been entangled in the war since 1939. Germany, Japan and Italy formed the opposing Axis Powers. Ultimately, Germany surrendered on May 8, 1945, after multiple cities were firebombed and their dictator, Adolf Hitler, committed suicide on April 30, 1945. The war officially ended on September 2, 1945, when Japan formally surrendered following the bombings of Hiroshima and Nagasaki.

The Korean War, also known as the Korean Conflict, began when the army of North Korea, a communist country, invaded South Korea. North Korea's goal was to conquer South Korea and join the two nations together as one under joint communist rule. The Soviet Union, or USSR, also played a significant role in the conflict, providing medical services, pilots and aircraft to aid the North Korean-Chinese forces. This added to the mounting tensions between the formerly allied U.S. and USSR.

The United States led a United Nations (UN) effort to aid South Korea in its fight against North Korea. The UN forces included troops from a dozen countries. China provided assistance to North Korea. After the conflict ended in a stalemate, the Korean Demilitarized Zone was put in place to establish a buffer zone between North Korea and South Korea.

The Vietnam War was fought between forces representing the communist countries in Southeast Asia, led by North Vietnam, against South Vietnam and other countries in the region that were not under communist rule. The U.S. was involved from the very beginning, initially providing on-ground training for South Vietnamese forces.

In the Gulf War, dubbed Operation Desert Storm, the U.S. headed up coalition forces authorized by the UN. This coalition included troops from 34 nations working together to accomplish the goal of liberating Kuwait from Iraq. In the summer of 1990, Iraq was able to overtake and occupy Kuwait in just a few hours. After a UN embargo and sanctions were unsuccessful, the next step was military force. The coalition was victorious in their efforts, which involved air and ground forces. Kuwait was liberated, though Saddam Hussein's regime remained in power in Iraq.

Though the 21st century has many decades left to go, the U.S. has already been involved in two major wars.

Dubbed Operation Enduring Freedom, the War in Afghanistan began shortly after the 9/11 attacks on the World Trade Center in New York and the Pentagon in Washington, D.C. in 2001. The goal of this military action was to remove Al-Qaeda and Taliban forces from power in Afghanistan. The Taliban quickly retreated and collapsed, but Taliban leader Osama Bin-Laden escaped. A transitional government was put in power, reconstruction began and major combat operations had ceased by 2003. Forces remained to provide aid and assistance as progress was made.

However, widespread insurgency remained in the country. Osama Bin-Laden re-surfaced and was ultimately killed by U.S. Special Forces in 2011. Troop withdrawals were announced soon after, but ten years later, instability remained, as did a significant U.S. military presence. The U.S. government planned to withdraw all U.S. forces and allied troops by August 31, 2021. However, the Taliban and allied militant groups launched a broad offensive through the summer of 2021, ultimately taking over Kabul, and thus the country, on August 15, 2021. The last American military aircraft left Afghanistan on August 30, officially ending the U.S. military presence in the country.

Following the 9/11 terror attacks, the U.S. led coalition forces against Iraq in 2003. This military action was initially named Operation Iraqi Freedom, then renamed Operation New Dawn a year before the end of the conflict. After diplomatic attempts with Iraqi dictator Saddam Hussein proved ineffective, U.S. President George W. Bush declared war with Iraq on the basis that Iraq was part of an “axis of evil” that also included Iran and North Korea in the process of building weapons of mass destruction. The Bush administration launched massive airstrikes on Iraq, and Hussein went into hiding shortly after the first attack.

The U.S.-led coalition successfully overthrew the regime of Saddam Hussein, who was captured, put on trial and ultimately sentenced to death. However, conflict continued with insurgents who were resistant to the establishment of a new government in Iraq. The U.S. started reducing its forces in 2007. By the end of 2011, all American troops had exited the country. Thus, the war officially ended in 2011.

To get a clear picture of the major wars the U.S. has been involved in throughout history, review the visual timeline below.

Now that you've reviewed this timeline of the major wars the U.S. has been involved in, you might be interested in learning a bit more about the military. Start by discovering some common military vocabulary words. Then, explore some military slang sayings. From there you can explore other American conflicts like the Cold War.