Anadiplosis Examples and Their Powerful Effect

Anadiplosis is when a writer uses a word or phrase at the end of a sentence or clause and then repeats the same wording at the beginning of the next sentence or clause. You can see powerful anadiplosis examples in some of the greatest speeches, poems, and essays ever written. 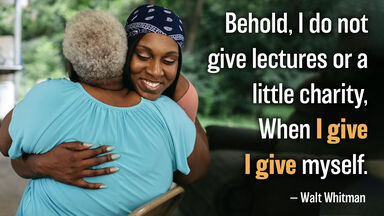 example anadiplosis i give myself

Anadiplosis is a word with Greek roots, and it means “to double back.” You can see how repeated a phrase or word in this way creates emphasis in these poems, speeches, and other works.

In “Lycidas”, Milton repeats the word “dead” for emphasis, making this a great example of anadiplosis:

Compels me to disturb your season due;

For Lycidas is dead, dead ere his prime,

Young Lycidas, and hath not left his peer.

In Richard II, Shakespeare repeats the words “fear” and “hate”:

The love of wicked men converts to fear;

That fear to hate; and hate turns one, or both,

To worthy danger, and deserved death.

An Irish Airman Foresees His Death by William Butler Yeats

Yeats’ poem, “An Irish Airman Foresees His Death”, is a great anadiplosis example involving a phrase and not just a single word:

I balanced all, brought all to mind,

The years to come seemed waste of breath,

A waste of breath the years behind

In balance with this life, this death.

Song of Myself by Walt Whitman

Walt Whitman repeats the phrase “I give” in “Song of Myself”, providing additional emphasis:

Behold, I do not give lectures or a little charity,

When I give I give myself.

This 1964 speech by Malcom X, given in Detroit, includes significant examples of anadiplosis, making it powerful and memorable:

Jesse Jackson used anadiplosis in his 1988 speech at the Democratic National Convention:

Suffering breeds character; character breeds faith; in the end faith will not disappoint.

Crime and Punishment by Fyodor Dostoevsky

In this excerpt from Crime and Punishment, you can see how Dostoevsky repeats “live” to give it emphasis:

Where is it I've read that someone condemned to death says or thinks, an hour before his death, that if he had to live on some high rock, on such a narrow ledge that he'd only room to stand, and the ocean, everlasting darkness, everlasting solitude, everlasting tempest around him, if he had to remain standing on a square yard of space all his life, a thousand years, eternity, it were better to live so than to die at once. Only to live, to live and live! Life, whatever it may be!

Nabokov repeats an entire phrase in this anadiplosis example from Lolita:

Anadiplosis adds power to a word or phrase through repetition, but it’s not the only literary device that works this way. Another strong tool is anaphora, the repetition of a phrase for emphasis. Understanding both will help you become a better reader and more powerful writer.