Anagram Examples and Their Functions

When you scramble a word to create a new word, you've created an anagram. For example, you can turn the word anagram into ragman, ma rang or nag a ram! Anagram examples can be fun and witty, and they often end in hilarious results. 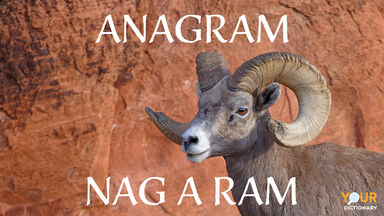 Many anagrams of simple words are random, new words that are not relevant to the original.

A creative way to use anagrams is to make them relevant to the original word or phrase. A great example is debit card and its anagram, bad credit. Additional examples of relevant (yet funny) anagrams are:

You can even create anagrams from a famous person's name. Some of these anagrams describe that person quite well, while others are quite silly! Examples of writers, actors, scientists, athletes, and politicians whose names work as anagrams include:

Examples of Anagrams in Literature and Movies

Have Fun With Words

Anagrams are an interesting play on words and challenge us to be creative and witty. To use wordplay in even more challenging (and hilarious!) ways, check out: