An analogy compares two things that are mostly different from each other but have some traits in common. By showing a connection between two different things, writers help to explain something important about one thing by using a second thing you already know about. Check out these analogy examples between words and literary concepts. 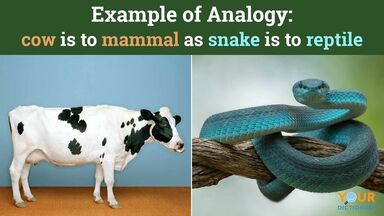 Word analogies, or verbal analogies, are like logic puzzles. These compare two different things by breaking them into parts to see how they are related. A word analogy looks like this:

Sometimes analogies use colons (:) to stand for words, so that when you read it aloud, the analogy looks like:

kitten is to cat as puppy is to dog

Analogies can show many different types of word relationships. The key is deciding what the relationship between the first set of words is, and matching it in the second set.

The analogy relationships get trickier when you get past synonyms and antonyms, where word order doesn't matter. Word order matters in a part to whole relationship, in which the first word is a part of something, and the second word is the whole thing. For example:

Be careful about word order! The relationship could be whole to part instead, which means that the whole word comes first and the part word comes second.

Sometimes an analogy relationship lists a tool to the action it performs. In these cases, the order will go noun, verb, noun, verb. Examples of tool and action relationships include:

Notice that changing the word order to action to tool makes it verb, noun, verb, noun.

If you switch the relationship to action to person, you get a different analogy.

Watch out for that word order! Example to category relationships result in different types of analogies.

Cause to effect relationships can be nouns or verbs. However, they need to be the exact same relationship on both sides of the analogy. For example:

Again, try reversing these relationships to see how effect and cause analogies can be tricky.

Relationships of intensity are another type of analogy where word order matters. They involve one word of a lower intensity than the second word, such as:

You may also see analogies that feature nouns and words that describe them. These noun to adjective relationships include:

At first glance, you may think these relationships are antonyms. But a closer look at each word pair shows their descriptive relationship, even when you reverse them to adjective to noun:

You'll often find analogies in literature when the author is comparing two seemingly unlike things. Other literary devices, including metaphors and similes, do the same thing — but they do it a little differently.

While word analogies aren't often used in writing, the skill of making good comparisons and connections will help you better organize and explain your thoughts. You might find it helpful to describe an idea by explaining what it reminds you of. For more information on this topic, take a look at analogy examples. Or if you'd like to see literary analogies in action, check out 13 analogy examples in literature.