An analogy is a literary device often used in literature and poetry to make connections between familiar and unfamiliar things, suggest a deeper significance, or create imagery in the reader's mind. 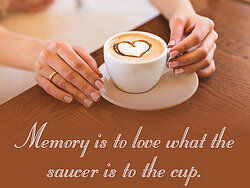 Saucer and cup of coffee as examples of analogy in literature

Like most literary devices, they paint a lurid picture. Analogies allow writers to say something in an abstract way, encouraging deeper thought.

Writers often use analogies to bring their prose to life, so let's take a look at some classic analogy examples in literature and poetry.

Analogies enable writers to make a quick comparison between two things and identify a common thread between them. The goal is for the reader to understand the relationship without a lengthy explanation. Here are some of the finest examples in literature:

"What's in a name? That which we call a rose
By any other word would smell as sweet.
So Romeo would, were he not Romeo called"

This analogy is likening Romeo to the freshness and sweetness of a rose.

"As cold waters to a thirsty soul,
So is good news from a far country."

This analogy is comparing good news you've been waiting for, to the sensation of cool water finally slipping down a parched throat.

"Life's but a walking shadow, a poor player
That struts and frets his hour upon the stage
And then is heard no more. It is a tale
Told by an idiot, full of sound and fury,
Signifying nothing."

This analogy compares life to a passing shadow, something fleeting that comes and goes.

"They crowded very close about him, with their hands always on him in a careful, caressing grip, as though all the while feeling him to make sure he was there. It was like men handling a fish which is still alive and may jump back into the water." - "A Hanging," George Orwell

This analogy is comparing the crowd's grip on a man to a fisherman who delicately, yet firmly, maintains his grip on a slippery fish.

"If you want my final opinion on the mystery of life and all that, I can give it to you in a nutshell. The universe is like a safe to which there is a combination. But the combination is locked up in the safe." - Let Me Count the Ways, Peter De Vries

This analogy compares the universe to a safe that cannot be unlocked. We're never going to find all the answers.

"Memory is to love what the saucer is to the cup." - The House in Paris, Elizabeth Bowen

This analogy compares the relationship between a cup and saucer to that of love and memory: memory holds on to love, as a saucer holds the cup.

"It has been well said that an author who expects results from a first novel is in a position similar to that of a man who drops a rose petal down the Grand Canyon of Arizona and listens for the echo." - Cocktail Time, P.G. Wodehouse

This analogy is comparing the response to a writer's first novel to a petal dropping into the Grand Canyon; there's nothing to hear, no great acclaim.

"A nation wearing atomic armor is like a knight whose armor has grown so heavy he is immobilized; he can hardly walk, hardly sit his horse, hardly think, hardly breathe. The H-bomb is an extremely effective deterrent to war, but it has little virtue as a weapon of war, because it would leave the world uninhabitable." - Sootfall and Fallout, E.B. White

This analogy compares using an H-bomb to armor that prohibits a soldier from moving; there would be no fight, just game over.

In poetry, analogies help the writer paint a vivid picture in the reader's mind, while adding a deeper layer of significance. The idea is to get a notion to resonate and move a reader's heart. Here are a few examples from some amazing poets:

"The day is done, and the darkness
Falls from the wings of Night,
As a feather is wafted downward
From an eagle in his flight."

This analogy likens the closing of a day to a feather drifting softly from an eagle's wing.

"There is no frigate like a book
To take us lands away,
Nor any coursers like a page
Of prancing poetry.
This traverse may the poorest take
Without oppress of toll;
How frugal is the chariot
That bears a human soul!"

- "There is no frigate like a book," Emily Dickinson

This analogy is saying that nothing on this earth can move a human's soul more effectively than a book, not even a powerful warship (frigate).

"Nature's first green is gold,
Her hardest hue to hold.
Her early leaf's a flower;
But only so an hour.
Then leaf subsides to leaf.
So Eden sank to grief,
So dawn goes down to day.
Nothing gold can stay."
- "Nothing Gold Can Stay," Robert Frost

This analogy makes the point that life inevitably changes, like the changing colors of nature.

This analogy illustrates desire, likening it to a mare pawing at a doorway, seeking entrance.

"Make me Thy loom then, knit therein this twin;
And make Thy holy spirit, Lord, wind quills;
Then weave the web Thyself. The yarn is fine.
Thine ordinances make my fulling mills.
Then dye the same in heavenly colors choice,
All pinked with varnished flowers of paradise."
- "Huswifery," Edward Taylor

This analogy is likening people's need to be molded by God to the manner in which yarn is weaved into something spectacular.

Analogies help us illustrate our points with a soft swish around the literal meaning. They provide flounce to our prose and are intended to awaken readers' minds.

What better way to instill this greatness into a writer than to start young? If you'd like to plant that seed today, we hope you'll enjoy sharing these Analogy Examples for Kids that include the logic puzzles that are word analogies.