Anaphora uses the repetition of a word or phrase at the beginning of a work in following clauses or sentences to add emphasis or emotion. Learn more about anaphora through a clear definition and several anaphora examples in poems, literature, songs, and speeches. 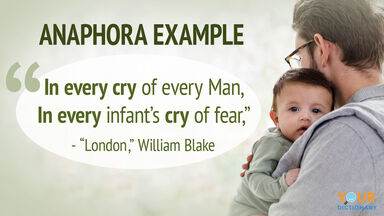 Anaphora is a rhetorical device used to emphasize meaning while adding rhythm to a passage. This technique consists of repeating a specific word or phrase at the beginning of successive lines or passages. The repetition of a word can intensify the overall meaning of the piece. Writers and public speakers use anaphora as a form of persuasion, as a method to reinforce a specific idea or as an artistic element. See how this works through William Blake’s repeated use of in every in the poem "London."

“In every cry of every Man,
In every
infant's cry of fear,
In every voice, in every ban”
- "London," William Blake

See how anaphora is used in literature and speeches through more anaphora examples.

Anaphora in Literature and Poetry

There are many anaphora examples found in literature, and particularly in poetry, where the anaphora drives the pace of the poem. Dive into some famous examples of anaphora in literature.

The repetitive use of and in "Sonnet 66" demonstrates William Shakespeare's mastery of the anaphora technique.

“Tired with all these, for restful death I cry,
As to behold desert a beggar born,
And needy nothing trimm'd in jollity,
And purest faith unhappily forsworn,
And gilded honour shamefully misplac'd,
And maiden virtue rudely strumpeted,
And right perfection wrongfully disgrac'd,
And strength by limping sway disabled
And art made tongue-tied by authority,
And folly - doctor-like - controlling skill,
And simple truth miscall'd simplicity,
And captive good attending captain ill”

I Remember by Joe Brainard

The repetitive use of I remember adds rhythm to this passage by Joe Brainard.

“I remember a piece of old wood with termites running around all over it the termite men found under our front porch.
I remember when one year in Tulsa by some freak of nature we were invaded by millions of grasshoppers for about three or four days.
I remember, downtown, whole sidewalk areas of solid grasshoppers.
I remember a shoe store with a big brown x-ray machine that showed up the bones in your feet bright green.”

Out of the Cradle Endlessly Rocking by Walt Whitman

Watch how this anaphora works in Walt Whitman’s "Out of the Cradle Endlessly Rocking." Notice the repetitive use of from the.

“From the memories of the bird that chanted to me,
From your memories sad brother, from the fitful risings and fallings I heard,
From under that yellow half-moon late-risen and swollen as if with tears,
From those beginning notes of yearning and love there in the mist,
From the thousand responses of my heart never to cease,
From the myriad thence-arous'd words,
From the word stronger and more delicious than any,
From such as now they start the scene revisiting,”

Allen Ginsberg also makes use of the repeated word who in "Howl."

“angelheaded hipsters burning for the ancient heavenly connection to the starry dynamo in the machinery of night,
who poverty and tatters and hollow-eyed and high sat up smoking in the supernatural darkness of cold-water flats floating across the tops of cities contemplating jazz,
who bared their brains to Heaven under the El and saw Mohammedan angels staggering on tenement roofs illuminated,
who passed through universities with radiant cool eyes hallucinating Arkansas and Blake-light tragedy among the scholars of war,
who were expelled from the academies for crazy & publishing obscene odes on the windows of the skull.”

T.S. Eliot makes use of and to add flow to his poem "The Waste Land."

“A woman drew her long black hair out tight
And fiddled whisper music on those strings
And bats with baby faces in the violet light
Whistled, and beat their wings
And crawled head downward down a blackened wall
And upside down in air were towers
Tolling reminiscent bells, that kept the hours
And voices singing out of empty cisterns and exhausted wells.”

The Tale of Two Cities by Charles Dickens

Poetry is famous for anaphora but it’s not the only place you can find it. Charles Dickens makes use of anaphora in the opening of The Tale of Two Cities.

You can also see how Salinger added emphasis to the rain in The Catcher in the Rye.

"It rained on his lousy tombstone, and it rained on the grass on his stomach. It rained all over the place."

Many politicians and public speakers use anaphora in their speeches to make the pertinent points stand out for the audience. In this case, anaphora is used to reinforce specific ideas and make them clear and memorable to those listening.

Winston Churchill's We Shall Fight Speech

Winston Churchill was famed for his public speaking and made good use of many rhetorical devices including anaphora. Consider this speech to the House of Commons in June 1940.

Martin Luther King’s I Have a Dream Speech

Another great example of anaphora in a speech is Martin Luther King Jr's address at the March on Washington in 1963. Notice how he repeatedly points out his dream.

Abraham Lincoln was also an excellent public speaker. In his Second Inaugural Address to the nation, he used this example of anaphora.

"With malice toward none; with charity for all; with firmness in the right …"

When words are repeated in a song, it makes them catchy and easy to remember. Therefore, artists use anaphora in various song genres. Check out how this works through a few examples.

Pushing Me Away by Linkin Park

Linkin Park makes fabulous use of anaphora why I in their song Pushing Me Away.

Every Breath You Take by The Police

The Police also used anaphora flawlessly to add repetition to the song Every Breath You Take.

Even pop star Katy Perry makes use of anaphora through her song Firework to help generate emotion.

"Do you ever feel, feel so paper-thin
Like a house of cards, one blow from caving in?
Do you ever feel already buried deep
Six feet under screams but no one seems to hear a thing
Do you know that there's still a chance for you
'Cause there's a spark in you?"

Anaphora has another meaning. In grammar, anaphora is the use of a pronoun or similar word to refer back to an earlier word or phrase. The anaphoric term for this is an anaphor. Unlike anaphoras in literature, using an anaphor in grammar avoids repetition in conversation or text. For example: "Anthony plays football. He likes sports." The word he is an anaphor referring back to Anthony. Anthony is the antecedent in the sentence. The following are some examples where one word refers to another:

The Importance of Using Anaphora

Anaphora examples show you how cleverly simple language can be used. Anaphora can be an important part of language both in speech and in writing. This rhetorical device adds emphasis to ideas and can generate emotion as well as inspire the reader. Anaphora also adds rhythm to a line or passage making the piece more enjoyable to read.

However, anaphora can be overused, where the repetition ends up being boring rather than inspiring. Be aware of the number of times that a phrase or word is used and how your writing flows, so you get the most out of using anaphora. Keep your learning of literary devices going by looking at epistrophe examples.