Anastrophe is a type of syntax inversion that changes the order of a sentence’s structure for effect. It is often used synonymously with hyperbaton, but can also specifically refer to a specific type of inversion (adjective after the noun). Keep reading to find famous examples of anastrophe in literature and speech. 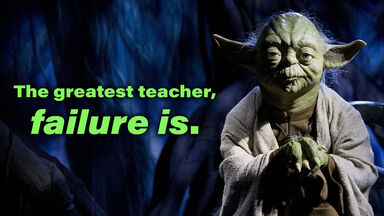 One of the most well-known characters who speaks in anastrophe is Yoda from the Star Wars films. When he wants to state that failure is the best teacher, he says “The greatest teacher, failure is.” The subject and verb (failure and is) come after the object in the sentence (the greatest teacher). Here are examples of anastrophe used for narrative or dialectical effect in literature.

Of pain you could wish only one thing: that it should stop. Nothing in the world was so bad as physical pain. In the face of pain there are no heroes.

Instead of writing the sentence in a standard syntax (“There are no heroes in the face of pain”), Orwell inverts the first and second halves. This allows him to repeat the word “pain” as closely as possible to its previous use and to end the sentence with the foreboding line “there are no heroes.”

Toni Morrison’s gift for wordplay is apparent in her book The Bluest Eye. When comparing an intolerant community to inhospitable soil, she declares:

Certain seeds it will not nurture, certain fruit it will not bear, and when the land kills of its own volition, we acquiesce and say the victim had no right to live.”

Her use of anastrophe in this passage allows her to start two clauses with the word “certain,” building a lovely parallel structure. The rest of the sentence breaks the parallel by ending the anastrophe, and reverting back to standard English syntax.

William Shakespeare’s use of anastrophe has coined many phrases that we still use today. Check out Polonius’ advice to his son Laertes from Hamlet:

Neither a borrower nor a lender be;

For loan oft loses both itself and friend,

And borrowing dulls the edge of husbandry.

This above all – to thine own self be true,

And it must follow, as the night the day,

Thou canst not then be false to any man.

Both of the bolded lines are probably familiar to you. By placing the verb at the end of the line, Shakespeare puts the emphasis on the vital part of Polonius’ advice – and foreshadows Laertes’ fate.

You’ll find all kinds of literary and syntactical devices in Herman Melville’s Moby Dick. Read this excerpt for an example of anastrophe in the novel’s narration:

For as this appalling ocean surrounds the verdant land, so in the soul of man there lies one insular Tahiti, full of peace and joy, but encompassed by all the horrors of the half-known life.

Melville brings the prepositional phrase “in the soul of man” before the natural beginning of the sentence, “there lies one insular Tahiti.” He brings the reader’s attention to the concept of a soul by surrounding the anastrophe with sentences that have standard English syntax.

You only need to glance at the first sentence of J.R.R. Tolkien’s The Hobbit to find an example of anastrophe. Not only do readers have an immediate sense of Bilbo’s living arrangements, they get a feel for Tolkien’s jaunty writing style.

In a hole in the ground there lived a hobbit. Not a nasty, dirty, wet hole, filled with the ends of worms and an oozy smell, nor yet a dry, bare, sandy hole with nothing in it to sit down on or to eat: it was a hobbit-hole, and that means comfort.

Like Melville’s example above, it places the prepositional phrase before the verb and subject. Readers picture the hold in the ground before they even learn the word “hobbit” – exactly as the author intended.

Many famous speeches use anastrophe as a rhetorical device. Anastrophe in speech causes an audience to listen a bit more carefully to the message of the speaker. Check out these examples of anastrophe in famous historical speeches.

John F. Kennedy’s verbal flourish is a hallmark of his speaking style. Read this example of anastrophe from his 1961 inaugural address:

Note how the “trumpet summons” uses standard syntax, but “arms we need” and “embattled we are” are both inverted. This example of anastrophe establishes the parallel structure that gets audiences listening and eager to agree.

When bidding America goodbye, Ronald Reagan referenced the well-known “city on a hill” image from his previous speeches. But he took a different approach in his farewell address:

And how stands the city on this winter night? More prosperous, more secure and happier than it was eight years ago. But more than that: after 200 years, two centuries, she still stands strong and true on the granite ridge, and her glow has held steady no matter what storm.

Reagan’s speeches are known for straightforward syntax – so why the anastrophe here? It’s noteworthy that the verb (“stands”) comes before the subject (“city”), which introduces Reagan’s points about the current state of the union.

We Shall Fight on the Beaches

Winston Churchill’s “We Shall Fight on the Beaches” speech spurred a nation to face a challenge like none before. He proves the power of rhetoric with his mastery of speech:

The British Empire and the French Republic, linked together in their cause and in their need, will defend to the death their native soil, aiding each other like good comrades to the utmost of their strength. Even though large tracts of Europe and many old and famous States have fallen or may fall into the grip of the Gestapo and all the odious apparatus of Nazi rule, we shall not flag or fail.

(Churchill, “We Shall Fight on the Beaches”)

Churchill inverts the direct object (“their native soil”) with the indirect object (“to the death”). His anastrophe emphasizes the passion of Allied soldiers heading into the jaws of World War II.

Give Me Liberty or Give Me Death

Patrick Henry is famous for his revolutionary declaration: “Give me liberty or give me death!” But look closer at the rest of his speech to find examples of anastrophe:

And judging by the past, I wish to know what there has been in the conduct of the British ministry for the last ten years to justify those hopes with which gentlemen have been pleased to solace themselves and the House. Is it that insidious smile with which our petition has been lately received? Trust it not, sir; it will prove a snare to your feet. Suffer not yourselves to be betrayed with a kiss.

(Henry, “Give Me Liberty or Give Me Death”)

Using “Trust it not” and “suffer not” so closely in proximity redoubles his warning to the American revolutionaries. Ending the sentence with “betrayed with a kiss” underscores the ways he fears the British may try to win over the Americans with false niceties.

I Will Fight No More Forever

Chief Joseph of the Nez Perce, also known as “Thunder Traveling to the Loftier Mountain Heights,” surrendered to the American military in 1877. His address ended with the following line:

Hear me, my Chiefs! I am tired; my heart is sick and sad. From where the sun now stands I will fight no more forever.

By beginning the sentence with a prepositional phrase, Chief Joseph places his surrender in a finite time. The subject and verb are almost secondary to this momentous occasion.

Anastrophe Examples in Poetry and Music

Using anastrophe for poetic effect is a popular tool for poets and musicians. Changing a line’s syntax allows writers to manipulate the poetic meter of the line or lyric. Keep reading for examples of anastrophe from songs and poems.

Edgar Allen Poe was the master of twisting his poetry around to defy reader expectations. He accomplishes this task beyond his legendary plot twists, but within his poems’ wording. Read these examples of anastrophe from “The Raven” to learn more:

Deep into that darkness peering, long I stood there wondering, fearing,

Doubting, dreaming dreams no mortal ever dared to dream before;

But the silence was unbroken, and the stillness gave no token,

And the only word there spoken was the whispered word, “Lenore?”

This I whispered, and an echo murmured back the word, “Lenore!”—

Merely this and nothing more.

The speaker of “The Raven” is becoming more and more agitated and confused as the poem progresses. The fifth stanza begins with a prepositional phrase (“deep into that darkness”) followed by the verb (“peering”). It continues with several additional examples that turn the speaker further into madness.

Langston Hughes infuses America’s backwards approach to race in all of his writing. His poem “Harlem” uses anastrophe in the first stanza – but reverses the syntax for the last stanza. Read these stanzas here:

Here on the edge of hell

The old kicks in the back,

The old "Be patient"

They told us before...

On the edge of hell

And look out on the world

What we're gonna do

In the face of what

Notice how the first line places the prepositional phrase first (“here on the edge of hell”) before the verb (“stands”) and the subject (“Harlem”), making the sentence almost completely backwards. But in the first line of the last stanza, the sentence is straightened out in standard English syntax (“So we stand here / on the edge of hell / in Harlem”). It reflects Hughes’ speaker looking forward while remembering injustices of the past.

Walt Whitman’s elegy to Abraham Lincoln includes several examples of anastrophe. Lines with standard syntax reflect how straightforward their victory should have been, while lines with anastrophe reveal how terribly it has turned around in “O Captain! My Captain!”

O Captain! my Captain! our fearful trip is done,

The ship has weather’d every rack, the prize we sought is won,

The port is near, the bells I hear, the people all exulting,

While follow eyes the steady keel, the vessel grim and daring;

O the bleeding drops of red,

Where on the deck my Captain lies,

Both lines end with two adjectives that describe their subjects (“the vessel grim and daring,” “Fallen cold and dead”). Describing the Captain as dead in the final line of the stanza, after such exuberant imagery beforehand, shocks the reader as Whitman himself was shocked by Lincoln’s assassination.

My Country, ‘Tis of Thee

Samuel Francis Smith’s patriotic song “My Country, ‘Tis of Thee” has anastrophe right in the title. It doesn’t include a subject or verb until the third line:

My country, 'tis of thee,

Of thee I sing;

Land where my fathers died,

Land of the pilgrims' pride,

Smith shifts the focus of the sentence from himself to “sweet land of liberty” by leaving the subject and verb till the end of the line. Rather than end the verse with “Let freedom ring from ev’ry mountainside,” he uses anastrophe for a more lyrical ending: “Let freedom ring!”

Shakespeare’s poetry, ever present in his plays, regularly inverts its lines to achieve a desired meter. Read the first few lines from “Sonnet 18” to see it for yourself:

Shall I compare thee to a summer's day?

Rough winds do shake the darling buds of May,

And summer's lease hath all too short a date:

Sometime too hot the eye of heaven shines,

And often is his gold complexion dimm'd;

And every fair from fair sometime declines,

The last four lines end with strong verbs, contrasting with the previous four lines’ syntax. Shakespeare not only creates a steady iambic pentameter, he also varies the syntax with anastrophe for the pleasing end rhymes.

Literary devices are helpful in any written or spoken media. They create interest for listeners and readers, vary sentence style in a sophisticated way, and help convince an audience of a speaker’s argument. For more resources on literary devices that are helpful as rhetorical tools, check out this article about non-literal figurative devices.