The definition of an argumentative essay is a research paper that takes a position on a controversial issue and tries to present evidence in favor of that position. The world is full of argumentative essay topics. You can select a high-profile subject like abortion or go for a smaller fish like organic eating.

The best advice anyone can give is to select a topic you’re passionate about. This will make the research and writing - dare we say - fun. Below, you’ll find two examples of an argumentative essay as well as several links to other resources that’ll help you start crafting a winning argument today. 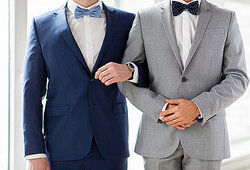 A happy gay couple walking down the aisle
Advertisement

The first sample essay below follows the sample outline presented in Argumentative Essay Outlines. The basic formula is this:

This essay is something a high schooler might consider as they prepare for the four most exciting years of their lives - college.

Much of our learning takes place outside the classroom. We learn how to maintain budgets, forge friendships, develop business relationships, and more. Imagine extending those skills on a global level. We would immediately cease to believe the world only contains the people and things we can see but, rather, a wide variety of opinions, customs, beliefs, and ethics. This is why every college-level student must study abroad during their undergraduate years. They will learn more in that semester abroad than in any other academic year.

According to IES Abroad, a company that encourages students to become international leaders, students who study abroad are more likely to be accepted into the graduate degree program of their choice. In fact, 90% of students who studied abroad with IES are admitted to their first or second choice for graduate school.

Imagine walking into an interview and being able to discuss preparing the most popular dish in India or organizing the best route to take from Sydney, Australia to Perth. Not only does this strike up a memorable conversation, but it also demonstrates a student’s fierce independence and determination. All this makes someone who has studied abroad a more desirable candidate for their dream job. As if IES Abroad’s statistic above was not astounding enough, it has been proven that 97% of students who study abroad find employment within 12 months of graduation (Smith, 2019, p. 17).

Beyond college, students who study abroad will be better equipped to succeed in the workplace. Their broadened worldview will help them relate to their co-workers, especially in a worldwide organization. This increased scope of knowledge allows 25% of students who study abroad to receive higher starting salaries. That is clear evidence that their experiences and views are valued by employers.

In spite of all these benefits, some parents simply will not allow their children to study abroad. A portion will argue that it is not safe. Others will argue that studying abroad costs too much money. In these cases, it is important to take a look at one semester’s financial aid statement. How much does it cost to be a student at a local university? When tuition, housing, textbooks, transportation, and meal plans are considered, it becomes difficult to argue that there’s a stark difference in the cost of a semester at home versus a semester abroad.

Studying abroad will have long-lasting, positive implications on a student’s future as an academic and a professional. New windows of opportunity will be flung open the moment an undergraduate boards a plane. Why not make an appointment with the study abroad center at your university? You have nothing to lose by starting a conversation today.

So, what is an argumentative essay? It’s a persuasive argument that leaves no room for interpretation. By the time someone’s finished reading one of these essays, they should feel as though there’s no question about the writer’s opinion. Here’s a sample essay that someone in middle or high school could write.

Without Alcohol, The World Would Be a Better Place

It was 8:54 p.m. on a warm Sunday evening in mid-July. Westlake Middle Schooler Abigail Parnas was walking home from her Nana’s house alongside her mother. Engrossed in her new iPad, they didn’t hear the speeding car. Both she and her mother were mowed down by a 2018 Mercedes-Benz G-Class SUV. They died instantly.

A 32-year-old woman who was upset over an argument she had with her husband proceeded to drink two bottles of wine and then get behind the wheel to buy a third. She took their lives in less time than it takes to say, “Cheers.” If alcohol was banned, there would be a reduction in violent crimes and a diminished number of vehicular manslaughter cases. More to the point, the ever-popular Abigail would still be alive.

Every day, nearly 30 people die, thanks to drunk-driving crashes (Wilson, 2019, p. 45). That equals one person every 48 minutes. In less time than it takes someone to watch the latest episode of Game of Thrones, someone will be killed due to drunk driving.

If a high school student begins drinking alcohol during these formative years, they become five times more likely to drop out of school (Perry, 2018, p. 13). Worse, since alcohol lowers one’s inhibitions, it is likely to lead to even greater disasters, including drug abuse and unsafe sexual encounters.

People all over the world drink to celebrate happy occasions. They also drink with friends after a difficult day. Social drinkers ingest wine or beer while preparing dinner, watching a movie, sitting out on the back patio, enjoying a picnic, dining downtown, and more. Why is alcohol so pervasive if it is a choice? Why do so many people choose to drink it? Are more people dependent than they realize?

Over 17 million Americans have alcohol use disorders (Legg, 2019, p. 78). Not every heavy drinker will become a full-fledged alcoholic, but alcoholism is a progressive disease. So, the more people rely on it “in good times and in bad,” the more likely they are to develop a dependency.

It’s easy to argue that the entire population does not have to be restricted from alcohol simply because certain people cannot control their intake. However, what if the gateway to bad decisions was removed? After all, alcohol is an addictive substance. Why should it be placed in anyone’s hands as a tempting invitation to death’s door? Even if someone is a moderate drinker, alcohol serves no health purposes. With every sip, partakers are ingesting ethanol, the same thing that is pumped into the gas tanks of cars.

That 32-year old woman went from a life of luxury to life in prison with only one hour of sunlight. She eats slosh for breakfast, unidentifiable meat for lunch, and soggy potatoes for dinner. No one comes to visit her. She hasn’t laid eyes on her husband or children in over a decade. Prison psychologists can’t break her of her self-imposed silence.

Her father died of cirrhosis of the liver. Her father’s father fell off the back of a pickup truck in a drunken stupor, cracked open his skull, and died before his legs hit the ground. Every day, she lies in bed wondering when she’ll die, too. In a world without alcohol, she still would have made plenty of bad decisions, but she never would have landed in a prison cell because she took the lives of sweet Abigail and her loving mother.

Issues pertaining to academics, drugs or alcohol, politics, and religion make for pretty powerful argumentative essays. In another article, we’ve prepared a list of the Top 10 Argumentative Essay Topics. You might also want to explore high school debate topics. Here are some topic suggestions, from that list and others:

What Do You Stand For?

Argumentative essays can serve as a turning point for some people. Persuasive writing is a very powerful weapon. No matter what format you’re tasked with, How to Write an Essay can help you pull together all your ideas and present them in a coherent and logical manner. No matter where you go in life, remember the power of the written word. You can change lives with it.