25 Barbara Bush Quotes That Will Remain Throughout History

When George W. Bush was elected president in 2000, his mother Barbara became the second American woman in history to be a Second Lady, a First Lady, and the mother of another president, following Abigail Adams in this rare distinction. But Barbara Bush's contribution to history is much more involved than her relationship to her husband, George H. W. Bush, and her son. Driven by her devotion to family literacy and volunteerism, Barbara Bush became an American legacy in her own right — and her words have endured long after she left the White House. 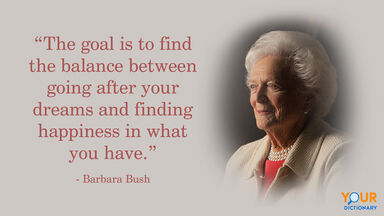 George and Barbara Bush were married for 73 years, had six children, 17 grandchildren (including granddaughter Barbara Bush, who was named after her grandmother), and nine great-grandchildren. It’s fair to say that Barbara Bush knew a thing or two about the value of family. She focused on the family unit as the main component of a successful life, and accordingly, a successful country. While several of Barbara Bush's family quotes may feel poignant, you'll find a trace of her trademark wit as well.

Barbara Bush's passion for extending literacy to all Americans brought educational inequality to national attention. From forming the Barbara Bush Foundation for Family Literacy to speaking out for community volunteerism, Barbara Bush consistently spoke out on the importance of hard work and reading to children.

Although Barbara Bush spent decades in the political limelight of the Republican Party, she didn't define herself by the party's platform. You'd sooner find her in a church pew or at the family table than behind a debate podium — but that doesn't mean she didn't have opinions on American politics.

Barbara Bush's Advice For the Future

Whether she was guiding her children and grandchildren, American parents, or future first ladies, Barbara Bush always had a piece of advice to share. Traditional in nature, these sage, common-sense quotes resonate with generations of all ages.

Barbara Bush's words of wisdom continue to guide American citizens and politicians today. If you'd like to read more about American First Ladies and their words of wisdom, check out: