Benjamin Franklin Quotes That Move and Inspire You

Few men boast such an impressive resumé as Benjamin Franklin. Not only was he one of the Founding Fathers of the United States, but he also made many contributions to the fields of politics, diplomacy, publishing, science, and much more. Arguably his greatest tools were his words, which he used to help build the U.S. and inspire a revolution. 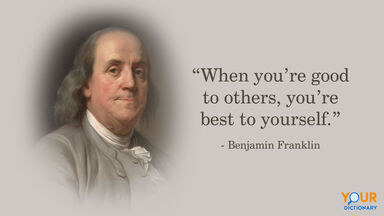 Throughout his life and works, Franklin offered timeless advice and insights on everything from the human condition to freedom to the only certainties in life — death and taxes.

Quotes About the Written Word From Benjamin Franklin

Benjamin Franklin spent much of his career as a newspaper editor and publisher. His love of the English language served him and his country well as he later became an ambassador to France and authored many political essays.

As one of the Founding Fathers, the so-called “First American” Benjamin Franklin spoke passionately about the need for independence and the importance of liberty.

Quotes About War, Revolution and Justice From Benjamin Franklin

Franklin saw many wars during his lifetime and played a crucial role in repealing the Stamp Act and securing Franco-American relations. He was also one of the signers of the Declaration of Independence, served as governor of Pennsylvania and was an abolitionist who spoke out against slavery.

Many of Benjamin Franklin’s greatest quotes were originally penned in Poor Richard’s Almanack, an annual publication written by Franklin under the pseudonym Poor Richard or Richard Saunders. The almanack was incredibly popular at the time of publication between 1732 and 1758, and Franklin’s tokens of wisdom are just as applicable today as they were nearly 300 years ago.

Words That Made History

Learn about some of American history’s most influential figures in their own words.