The 20 Best José Rizal Quotes To Live By

Filipino nationalist José Rizal’s life and death were both dedicated to his country. Using the ultimate weapon he could wield, Rizal wrote numerous political essays, poems and books decrying the Spanish occupation of the Philippines. Although he would not live to see the fruition of his life’s work, Rizal’s influence on the Philippine Revolution would ultimately lead his beloved country to independence from tyranny, and render him a national hero. 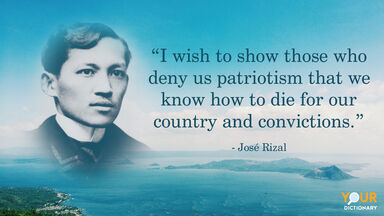 Dr. José Protacio Rizal did not begin his life as a revolutionary. A polymath by nature and education, Rizal primarily worked as an ophthalmologist and was conversant in 22 languages. He wrote his two most well-known books, El filibusterismo (The Reign of Greed) and Noli Me Tángere (Touch Me Not, or The Social Cancer) by the time he was 30 years old. However, Rizal had always been politically active and was not afraid to call out the Spanish government for its tyranny — or the Filipinos for their need to seek freedom.

To Rizal and his contemporaries, cowardice was the main roadblock to freedom. In order to be truly free, one must take the risk and face the danger — as Rizal himself did in his written works, even after being named an enemy of the Spanish state.

José Rizal was executed on December 30, 1896. Only 35 years old when he died, Rizal had already planted the seeds of revolution that would grow for decades to come. When the Philippines gained their independence 50 years later, it was Rizal’s voice, spirit and words that led them there.

José Rizal is remembered today for his vision and courage against overwhelming forces. For more inspiring words from civil rights leaders, check out: