Koesno Sosrodihardjo, better known as Sukarno, was the first president of the Republic of Indonesia from 1945 to 1967. He was a polarizing figure whose time in office was plagued by a continuous state of national crisis and corruption, leading to several assassination attempts on Sukarno. Others hailed him as the “Great Leader of the Revolution.” Nevertheless, he was instrumental in the fight for Indonesian independence from Dutch colonial rule and did so in part by using his oratory skills and giving a number of rousing speeches during his presidency. 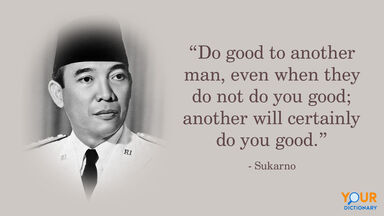 Portrait of Sukarno With Quote
Advertisement

Sukarno Quotes About Leadership and Liberty

In his speeches, Sukarno often delivered inspirational messages of independence and unity as he maneuvered through negotiations with the Dutch and the establishment of a new Indonesian government.

Quotes From the Opening of the Bandung Conference

Sukarno’s Speech at the Opening of the Bandung Conference on April 18, 1955, was a pivotal moment in his presidency and for Indonesia as he addressed the need for peace in order to bring prosperity to the nation.

These past presidents have given many inspirational speeches and memorable quotes that are just as relevant today as when they first delivered them.