15 British Sayings and Idioms to Know

It should come as no surprise that the people in the homeland of William Shakespeare and Winston Churchill have a way with words. England, after all, is the birthplace of the English language, and no one uses it better. In particular, the British make great use of idioms, or sayings, that convey more than the surface meaning of their words.

As playwright George Bernard Shaw famously put it, "The United States and Great Britain are two countries separated by a common language," so you can be forgiven for not always following what a Brit means. Let’s get up to speed with 15 British sayings and idioms to know, including their meanings and origin, and you won't be confused again. 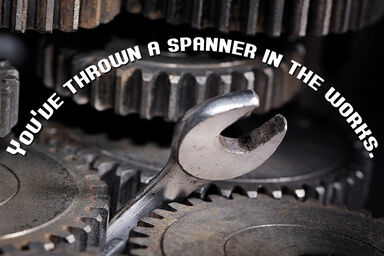 a spanner stuck in cogs
Advertisement

Going to see a man about a dog:
This phrase isn't meant to be taken literally but rather used as an excuse for leaving the room or otherwise getting out of someone's company. Though it may have originally referred to settling a dog-racing bet, it's more likely today to be said as an excuse to go to the bathroom - or to conceal a trip to the pub for a quick pint.

Only mad dogs and Englishmen go out in the midday sun:
Originally from a song by playwright Noel Coward, this line has been adopted into common usage in the UK. The song pointed out cultural differences between the British and their subjects in the colonies when the British refused to adapt to local customs - even if it meant a wicked sunburn out in the fierce heat. Today it can still refer to a stubborn refusal to changes one's ways or the British love of sun-worshipping on their "summer holiday."

He lost the plot:
On the surface, this seems to mean that someone has lost sight of an argument or the point they were making, but in practice, it's more about losing one's cool or good judgment. It's commonly heard in sporting situations when an athlete blows a play or when someone starts a fight.

I haven't done/heard that in donkey's years:
This phrase means that something hasn't happened in a very long time, especially when referring to something that's been out of style - or at least out of sight - for ages. It's not clear whether the phrase comes from a belief in the longevity of donkeys or is a watered-down version of "donkey's ears," which are quite long themselves.

You've thrown a spanner in the works:
"Spanner" is a British word for a wrench, so this is similar to the American phrase about throwing a monkey wrench into something - that is, ruining plans unexpectedly. The "works" can be visualized as a system of gears that would be locked up if someone threw a wrench in them to keep them from turning as they should.

That's the dog's bollocks:
This is akin to the 1920s slang saying about something being "the bees' knees" - meaning that it's the best. No one's really sure why talking about a dog's privates is a compliment, but not all sayings make logical sense.

And Bob's your uncle!:
This is an exclamation used after giving instructions or when something has been successfully completed. It can mean "and there you have it," "it's all good," or "simple as that." It can also mean that someone has it made. This meaning has a political history, referring to when Prime Minister Robert Cecil appointed his nephew to an important position, but the satire about nepotism has faded over time.

He can talk the hind legs off a donkey:
The Brits seem to have a thing for donkeys! In this case, this describes someone who's extremely chatty. The phrase is mostly silly, but it's worth remembering that donkeys are known for being ornery, so those particular hind legs probably put up a fight!

I'm off to Bedfordshire:
Though Bedfordshire is a real place in southern England, this phrase really just means someone is heading to bed. The fun comes from the pun on the word "bed."

It's brass monkeys outside!:
This is a contraction of "it's cold enough to freeze the balls off a brass monkey," meaning it's really cold out. Like the saying about raining cats and dogs, it doesn't make literal sense. In context, it serves as a vivid intensifier. Imagine it being said by someone shivering, and the meaning is clear, if absurd.

Look after the pennies and the pounds will look after themselves:
This is advice about being careful with money, dating back to the early 18th century. The idea is that you should watch how you spend small amounts of money. It's easy to think those lattes won't add up, but they do. Watch the small stuff, and you'll easily have pounds (the UK currency) saved up in no time.

Add another string to your bow:
This means acquiring a new skill to help you find a job or otherwise succeed in life. It could also mean to have an additional resource or backup plan. The saying refers to when archers carried a spare bowstring in case the first one broke. You will also hear the variation "having a second string to your bow."

That went down a treat:
This means that something was very enjoyable. It's most often used to refer to food, which makes the visual more powerful: Imagine gulping down a delicious dessert, and you get the idea. It's easy to do it because you like it.

He popped his clogs:
Like the American equivalent of kicking the bucket, this phrase is a slangy, irreverent way to say that someone has died. Its origin is uncertain but the underlying image is of slipping out of your shoes, which are connected to the earth in a physical way, unlike your spirit after death.

I've got the hump:
This is a very British way of expressing annoyance without actually talking about feelings. It makes light of a situation, and it's usually used for minor irritations rather than anything seriously upsetting.

Once you understand what these popular British sayings mean, it's easy to appreciate the color they add to the language. Not all idioms make logical sense, as their original meanings change over time, but these quirky phrases and quotes are what make the English language so unique and interesting - especially the version spoken in the UK.

Ready for some real fun? Learn some cockney insults from the East End of London for the next time you're having a barney with your trouble and strife.