Throughout his 40-year political career, Daniel Patrick Moynihan worked in five different presidential administrations, became the United States Ambassador to India and U.S. Representative to the United Nations, and was one of the longest-serving senators in American history as Senator from New York. Although he passed away in 2003, his contributions to 20th-century politics live in the form of his enduring quotes. 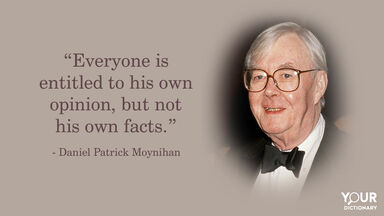 Daniel Patrick Moynihan strongly believed in a country’s duty to its people, particularly in the realm of free speech and human rights. He often wrote about these issues as intertwined, as countries with free speech tended to have few human rights problems.

Although Moynihan was a Democrat, he frequently spoke out against his own party as much (and perhaps more) than the opposing party. He saw the two groups as fallible, but also necessary to the ideological balance of the country.

Several of Moynihan’s quips have made their way into history books and modern political articles. His concise, cutting writing style translated to the way he represented both New York and the United States.

Daniel Patrick Moynihan had an immeasurable influence on today’s politics. For more inspirational quotes from political leaders, check out: