When you think of Davy Crockett, you probably think of either a coonskin cap, a buckskin jacket or the bear he killed when he was only three. The famous frontiersman did probably wear some coonskin and buckskin growing up in the backwoods of Tennessee (where he probably didn’t kill that bear as a toddler). However, the legacy of Davy Crockett reaches far beyond a Hollywood costume and a catchy song. 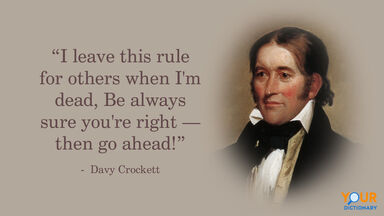 Fifty years after his birth at the end of the Revolutionary War, David ("Davy") Crockett died a hero’s death at the Battle of the Alamo. His entire life, the majority of which he details in his autobiography Narrative of the Life of David Crockett, of the State of Tennessee, embodied the spirit of the independent American.

Davy Crockett On Reading and Writing

Most American politicians during Davy Crockett’s lifetime were educated, land-owning men. But it was Crockett’s connection to the American public, not his education, that got him elected to represent Tennessee in the House of Representatives in 1827. While he’d never identify as a learned man, Crockett applied the lessons he’d learned from life throughout his time in Congress.

Davy Crockett On Congress and Politics

Davy Crockett’s time in Congress was short and contentious. After turning against Andrew Jackson and his Indian Removal Bill, Crockett lost re-election in 1831 (and was none too happy about it). He would be elected again in 1833, lose again in 1835, and ultimately leave his home state of Tennessee for Texas.

Born into a free America, Davy Crockett spent his life preserving its values — up to the very last minutes before his death. For more inspiration from famous Americans, check out: